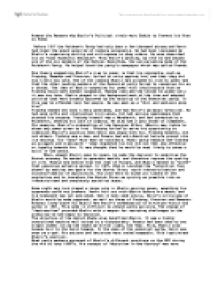 Assess the Reasons why Stalin's Political rivals were Unable to Prevent his Rise to Power Before 1917 the Bolshevik Party had only been a few thousand strong and Lenin had known the great majority of numbers personally. He had been impressed by Stalin's organising ability and willingness to obey orders. He once described him as "that wonderful Georgian". With Lenin's backing, by 1912 he had become one of the six members of the Central Committee, the policy-making body of the Bolshevik Party. He helped found the party's newspaper which was called Pravda. One theory suggesting Stalin's rise to power is that his opponents, such as Trotsky, Kamenev and Zinoviev, failed to unite against him, and that they did too little too late. One of the reasons Stalin was allowed to rise to power was that the other leading members of the Communist party failed to recognise him as a threat. ...read more.

His "race" were seen as outsiders. Other party members saw Trotsky as arrogant and dismissive - they respected him but did not feel any affection or loyalty towards him. It was thought that he would be most likely to cause a split in the party. When, Joseph Stalin came to power, he made the decision to modernise the Soviet economy. He wanted to generate wealth, and therefore improve the quality of life. Russia was behind from the rest of Europe, and Stalin wanted to "prove" that communism actually worked. In 1927, Stalin launched the "revolution from above" by setting two goals for the Soviet Union, rapid industrialisation and collectivisation of agriculture. His aims were to erase all traces of the capitalism and to transform the Soviet Union as quickly as possible into an industrialised and completely socialist state. Some might say luck played a large role in Stalin gaining power, something his opponents could not prevent. ...read more.

Trotsky's policy of Permanent Revolution focussed on spreading revolution and heading towards world revolution. On the other hand, Socialism in one country was the name given to the policy that Stalin promoted, and focussed on strengthening the revolution in Russia. This gave the Russians a special historic role and meant that they would not have to go to war. In conclusion, those that had the skill to oppose Stalin, like Trotsky, didn't realise how much of a threat was and failed to unite against him. He also had a great deal of luck - Lenin's criticisms of him in his testament were not made public, and he had the charge of factionalism to use to discredit anyone who opposed him. However, perhaps above all the most important reason was Stalin's megalomaniac personality, which made him an ideal dictator. Some have commented on his short height, suggesting that he had a tendency to keep himself to himself and was a "loner". Even the number of executions declined after his death. He was mad, evil and ruthless. ...read more.