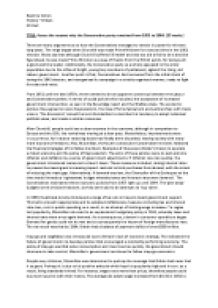 Assess the reasons why the Conservative party remained in power from 1951 to 1964.

﻿Beatrice Cohen History ? Britain Mr Bull TITLE: Assess the reasons why the Conservative party remained from 1951 to 1964. (25 marks) There are many arguments as to how the Conservatives managed to remain in power for thirteen long years. The reign began when Churchill was made Prime Minister for a second time in the 1951 election. Many say that although Churchill suffered ill health and was too old a frail to be a decisive figurehead, he was made Prime Minister as a way of thanks from the British public, for being such a good wartime leader. Additionally, the Conservative party as a whole appealed to the wider population due to the influx of bright, young tory members of parliament, against the tiring, old Labour government. Another point is that, Conservatives had recovered from the initial shock of losing the 1945 election, and reorganised its campaign in a strictly organised manner, ready to fight for seats and votes. From 1951 until the late 1970?s, there seemed to be an apparent consensus between the Labour and Conservative parties. ...read more.

This tactic proved inappropriate and he adopted deflationary measures including tax and interest rate rises, cuts in public spending, as a result, in an attempt of limiting wage increases. To regain lost popularity, Macmillan returned to an expansionist budgetary policy in 1963, whereby taxes and interest rates were once again lowered. As a consequence, a boom in consumer spenditure began. Demand for goods could not be met and so consequently the import of foreign manufactures rose. The net result was that by 1964, Britain had a balance of payment deficit of over £800 million. Stop-go and stagflation was introduced due to Britain’s lack of economic strategy. The indicated the failure of governments to develop policies that encouraged a constantly performing economy. The policy of stop-go was that when consumption and rises rose too quickly, the government should intervene to take control. Macmillan’s government continued to follow stop-go economics. Despite any criticisms, Macmillan was determined to portray the message that Britain had never had it so good. ...read more.

Also, the empire wanted freedom and therefore it was impossible for Britain to ?abandon? them; they were just providing their colonies with the freedom they craved. Overall, the financial problems which Britain faced did not prevent the vast popularity from gaining material goods. This meant the people?s confidence in Conservatives was high as their government were able to sustain this. I believe that the economic circumstance at the time Conservatives came to power did suffice have an element reason as to how the party stayed in power for so long. This is because they were not in a major economic difficulty and thus confidence was relatively high. Therefore, all the Conservatives had to do was maintain the optimism and adjust elements of finance that needed assistance. Macmillan does deserve a lot of the credit for the Conservative reign of thirteen years, and rightfully earned the nickname ?Supermac?. He cut income tax in the 1959 budget, he had industrial production racing ahead and unemployment was falling. The sharp rise in living conditions moved Britain forward in worldwide circumstances and enabled the Conservatives to stay in power between 1951 and 1964. ...read more.