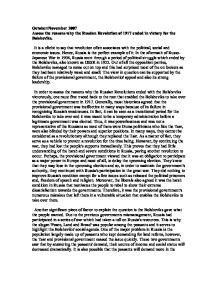 Assess the reasons why the Russian Revolution of 1917 ended in victory for the Bolsheviks.

October/November 2007 Assess the reasons why the Russian Revolution of 1917 ended in victory for the Bolsheviks. It is a clich� to say that revolution often associates with the political, social and economic issues. Hence, Russia is the perfect example of it. In the aftermath of Russo-Japanese War in 1904, Russia went through a period of political struggle which ended by the Bolsheviks, also known as USSR in 1922. Out of all the opposition parties, Bolsheviks managed to come out on top and this had surprised most of the on lookers as they had been relatively weak and small. The view in question can be supported by the failure of the provisional government, the Bolsheviks' appeal and also its strong leadership. In order to assess the reasons why the Russian Revolutions ended with the Bolsheviks victorously, one must first traced back to the root that enabled the Bolsheviks to take over the provisional government in 1917. Generally, most historians agreed that the provisional government was ineffective in many ways because of its failure in recognizing Russia's weaknesses. ...read more.

This is why the slogan 'Peace, Land and Bread' was popular among the peasants and it serves to highlight the Bolsheviks' social agenda. One of the major problem in Russia is the population largely made up of peasants who kept demanding for land reform, however, the Tsar and provisional government ceased the issue quickly. These two governments saw that by answering the peasants' demand, their source of income and social status will decreased dramatically. It is also possible that the peasants will demand more in the future such as political reform. Nevertheless, the Bolsheviks' actions were the exact opposite of what the previous governments did and this is probably why the peasants seemed to be more willing to accept them. There was an argument which the liberals argued it was the harsh situation in Russia that motivated the people to revolt and so, the chaotic situation provides a great opportunity to manipulate the whole process into their own good such as the introduction of New Economic Policy (NEP) by Lenin. On the surface, the people may seemed to be satisfied on the Bolsheviks but it was not true. ...read more.

He was able to foresee event that the others couldn't such as the peasants' pivotal role in which the previous governments failed to recognize it. Undoubtly, the army was the pillar of strength for the governments but they failed to realize that the peasant was the root of the whole process. Without the peasants' upheaval, the revolution may not happened at all. Supportively, Trotsky plays an equally important role to the Bolsheviks by bringing a disciplined and pragmatic approach to visualize Lenins' dream. A clear example of Trotsky's organization of the Red Army can be used to showcase Trotsky's commanding personality. Without the powerful and strong-willed personality of both Lenin and Trotsky, the October revolution will not be a success. In conclusion, the Bolsheviks administration perhaps may benefits Russia in the sense that Russia's fragile condition could be improved. An authoritarian government may suit Russia the best, given her massive land and population that needed to be controlled. Still, the October Revolution was seen as a seizure of power by the most of the historians, or it can also be argued as an answer to Russia's fragile conditions. Besides three reasons mentioned above, the function of CHEKA and NEP should also be considered as well that help to consolidate the Bolsheviks' power in Russia. ...read more.