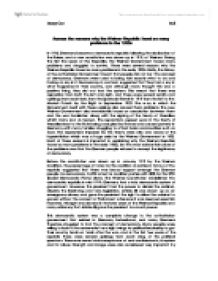 Assess the reasons why the Weimar Republic faced so many problems in the 1920s In 1918, Germany became a democratic republic following the abdication of the Kaiser, and a new constitution was drawn up in 1919, at Weimar. During the first five years of the Republic, the Weimar Government faced many problems and struggled to survive. There were several reasons why the Weimar Republic faced so many problems in the early 1920s. Firstly, the history of the authoritarian Government meant that people did not trust the concept of democracy. Germans were used to being told exactly what to do and having no say in it. Democracy, in contrast, suggested that they had a say in what happened in their country, and although many thought this was a positive thing, they did not trust the system. This meant that there was opposition from both the left and right, and there were several revolts and uprisings from each side; from the Spartacist Revolt in 1919 from the left to the Munich Putsch by the Right in September 1923. The way in which the Government dealt with these uprisings also caused them problems. The new Weimar Government also immediately faced an association between them and the war humiliation along with the signing of the Treaty of Versailles, which many saw as treason. The reparations agreed upon in the Treaty of Versailles lead to the Ruhr being occupied by France and caused poverty in Germany with many families struggling to afford basic commodities such as food. ...read more.

The revolt failed, resulting in Hitler's arrest. Hitler tried to force the powerful people in Bavaria to support the putsch by seizing them. They seemed to cooperate and support the putsch, but when Hitler released them they went to the police and the putsch was stopped. The Munich Putsch was the second revolution from the right wing; the other was the Kapp Putsch in March 1920. The Kapp Putsch began when the Government began to disband the Freikorps. General Luttwittz exploited the anger and called for President Ebert's resignation and the revival of the Freikorps. The Freikorps subsequently marched into Berlin and proclaimed Wolfgang Kapp, a 62-year-old Nationalist, as Chancellor. When the Government tried to suppress the putsch, the army refused with the head of the army saying "Reichswehr does not fire on Reichswehr". The government, forced to abandon Berlin, moved to Stuttgart. As it did so it issued a proclamation calling on Germany's workers to defeat the putsch by means of a general strike. The strike call received massive support. With the country paralysed, the putsch collapsed. Less than a month later, the Government had to face another uprising, this time from the left. The Free Workers Union of Germany formed as a reaction to the Kapp Putsch in the Rurh Valley. After the general strike was called, the Ruhr Red Army - an army of 50,000 left wing workers - defeated the Freikorps and the Reichswehr in the area and started the biggest armed workers' uprising in Germany. ...read more.

Constitutional weaknesses are the second most important cause of the problems faced by Weimar in the early 1920s, as this is the basis of the unsupported democracy, caused the government to be weak and gave the Reich President too much power. The defeat in World War I and the association with the Treaty of Versailles was the next important reason for the problems faced, as Germany lost a lot of strength due to the Treaty, and the agreement was seen as high treason by many Germans. The reparations imposed in the Treaty also damaged the country greatly and made it economically weak for the duration of the Weimar period, especially when the Ruhr was occupied by the French and when hyperinflation hit in 1923. The least important reason for the problems faced by the Weimar government was the way in which they dealt with the uprisings from the left and the right; although this caused unease in the country and may have been seen as unfair, there were reasons for the way they reacted to the uprisings and some would say that the Government were justified in reacting in this way. The uprisings can be seen as less important than the lack of support for democracy because the uprisings were a result as this lack of support; therefore it is just one outcome of the larger problem which was the lack of support. However, their reactions may have gone against what the democratic republic stood for, thus problems were still caused by this. ?? ?? ?? ?? Danny Carr ELS ...read more.