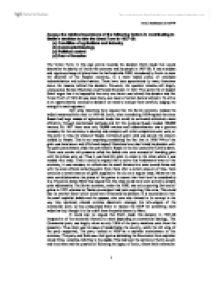 Assess the relative importance of the following factors in contributing to Stalin's decision to take the Great Turn in 1927-28: (a) Condition of agriculture and industry (b) Communist ideology (c) Political control (d) Fear of invasion.

Assess the relative importance of the following factors in contributing to Stalin's decision to take the Great Turn in 1927-28: (a) Condition of agriculture and industry (b) Communist ideology (c) Political control (d) Fear of invasion The 'Great Turn', in this case points towards the decision Stalin made that would determine the destiny of the Soviet economy and its people in 1927-28. It was a sudden and vigorous change of plans from the half-capitalist NEP, introduced by Lenin to stem the downfall of the Russian economy, to a more radical policy of wholesale industrialisation and collectivisation. There have been speculations by many historians about the reasons behind this decision. However, the question remains still largely unanswered. Roman Brackman and Harold Shukman in their 'The secret file of Joseph Stalin' argue that it is impossible that only one factor was behind this decision and the 'Great Turn' of 1927-28 was, most likely, as a result of certain factors behind it. To arrive at an approximately conclusive decision we need to analyse them carefully judging the strength in each argument. ...read more.

It is beyond doubt that the small capitalist kulaks and the nepmens, who were also claimed to be corrupt in the way they operated, created extreme discontent amongst the left-wingers of the communist party as they pressurised Stalin to replace the NEP for something more radical as they thought it to be a drift from the paths shown by Marx. It could also be argued that Stalin made this decision in 1927-28 irrespective of the economic factors but more depending on communist ideology. The Communist party was largely urban as only 7.6% of the party members were from the peasantry. Thus there was the issue of modernising the country, which the left wing of the party supported. The party looked at NEP as a capitalist encirclement of the economy. The party and Stalin saw their goal as defending the Revolution from capitalist blood thirsty vampires-referring to the kulaks. This had been the opinion of Lenin as well and thus there was the question of following the legacy of Lenin, whom Stalin referred to as the 'Father of the Revolution'. ...read more.

During the civil war of 1918-24, the western powers had clearly supported the 'whites' and from that time the communists had a certain amount of suspicion for the western powers. Britain had broken off diplomatic relations in 1927 and so did Poland. The Chinese nationalists attacked the communists which clearly suggested that the Soviet Union was surrounded by hostile nations which clearly undermined its national security. To avoid being totally annihilated once an attack was carried out rapid industrialisation was a prime necessity at that point, as Stalin thought in 1927-28. Thus we see the various reasons behind Stalin's 'Great Turn' in 1927-28 and their relative importance. We could see the various ways in which the reasons overlapped with one another and this clearly suggests that it is impossible that only one reason was behind the decision that was made in the Kremlin in 1927-28. It was possibly a combination of all the factors that played a role. However, it does appear that the state of the economy, its stagnation, the level of corruption, rise in unemployment levels and falling of living standards clearly led Stalin to make this decision of rapid industrialisation and collectivisation as he thought it would be the best way to achieve modernisation for the USSR. Aruni Mukherjee U6 MVW 1 ...read more.