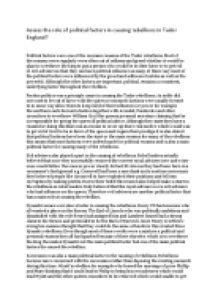 ﻿Assess the role of political factors in causing rebellions in Tudor England? Political factors were one of the common reasons of the Tudor rebellions. Most of the reasons were regularly were often out of selfness and greed whether it would be plan to overthrow the king to put a person who would be in their favor or to get rid of evil advisers so that they can have political influence as many of them vary most of the political factors were influenced by the greed and selfness of nobles as well as the powerful. Although the other factors are important, political, remains a consistent, underlying factor throughout the rebellion. Faction politics was a principle cause in causing the Tudor rebellions. As noble did not want to be out of favor with the queen or monarch factions were usually formed to in some way allow them to keep hold of their influences or power for example ...read more.

Cromwell had been a merchant and a onetime mercenary they believed people like Cromwell to have exploited their positions and fell into corruption by making profits. Due to their belief this reason also helped make a start in the rebellions as rebel leaders truly believed that the royal advisers were evil advisers who had influence on the queen. Therefore evil advisers are another political factor that has a main role at causing the rebellion. Dynastic issues were also a factor in causing the rebellions. Henry VII had enemies who all wanted a place on the throne; The Earl of Lincoln who was politically ambitious and dissatisfied with the role Henry had assigned him and Lambert Simnel had a strong claim to the throne and pretended to be the Earl of Warwick. Since Henry overthrew a king his enemies thought that they could do the same a therefore this created three dynastic rebellions. ...read more.

Therefore succession can be another political factor leading to causing the rebellions. In conclusion factions were the most repetitive political cause in the rebellions as they caused most of the rebellion. Even though they were political rebellions most did have an ulterior motive, personal reason to either gain prestige or to overthrow the king or queen to gain succession. In addition Dynastic issues played a part as well which similarly to succession rebellions were sparked out of the selfness of the nobles and councilors who did for the best of their interest. Evil advisers had a minor role to play as even though rebellions started from person reasons it was only a minority. In the end factions were the most constant political factor and the most constant political cause for the Tudor rebellions as people with money and power always start a faction to cause a rebellion. ...read more.