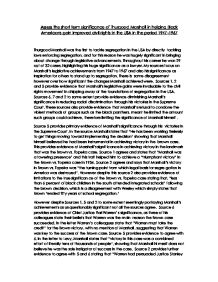 Assess the short term significance of Thurgood Marshall in helping Black Americans gain improved civil rights in the USA in the period 1947-1967 Thurgood Marshall was the first to tackle segregation in the USA by directly tackling laws enforcing segregation, and for this reason he was hugely significant in bringing about change through legislative advancements. Throughout his career he won 29 out of 32 cases, highlighting his huge significance as a lawyer. My sources focus on Marshall's legislative achievements from 1947 to 1967 and also his significance as inspiration for others to stand up to segregation. There is some disagreement however over how significant the changes Marshall achieved were. Sources 1, 2 and 5 provide evidence that Marshall's legislative gains were invaluable to the civil rights movement in chipping away at the foundations of segregation in the USA. Sources 6, 7 and 2 to some extent provide evidence diminishing Marshall's significance in reducing racial discrimination through his victories in the Supreme Court. These sources also provide evidence that Marshall's refusal to condone the violent methods of groups such as the black panthers, meant he limited the amount such groups could achieve, therefore limiting the significance of Marshall himself. Source 5 provides primary evidence of Marshall's significance through his victories in the Supreme Court. In the source Marshall states that "He has been working tirelessly to get things moving toward implementing the decision" showing that Marshall himself believed he had been instrumental in achieving victory in the brown case. ...read more.

Source 4 also shows that President Johnson respected Marshall, and thought he was worthy of a place on the Supreme Court. Source 2's account of the moment when President Johnson appointed Marshall to the Supreme Court provides evidence to agree with source 4. Source 2 states that "For nearly an hour a giddy Marshall joked around" showing that Marshall was not intimidated by the occasion. Source 2 also quotes Marshall as saying "The president of the United States told me that he thought I was the best person at the time to represent the United States" showing that Johnson respected Marshall's skills as a lawyer and believed him to be the obvious choice for filling the vacancy in the US Supreme Court. In this position of power Marshall could help to force the issue of civil rights further. However despite Sources 1, 2, 3 and 4 all providing evidence that Marshall's personality was key to his success, disagreement over Marshall's personality and its influence on others is provided by sources 2 and 7 to some extent, with both providing evidence that to some extent Marshall's stubbornness and bold personality even inhibited the achievements of others. Source 7 provides evidence of Marshall denouncing the actions of those advocating the use of violent methods to try to achieve change. In the source, Marshall states "Lawlessness is lawlessness. ...read more.

However although there is little evidence to show that Marshall's significance at directly tackling segregation was limited, source 7 provides evidence of Marshall's public criticism of the black power movement. This public criticism certainly damaged the black power movement's image and appeal, and this meant that Marshall perhaps limited the amount they could achieve. However although sources 1 and 2 both agree that Marshall refused to condone those who advocated violent methods, neither agree with 7 that Marshall's criticism was a significant factor leading to the failure of the Black power movement. On weighing up of the sources it is clear that the evidence provided by 4 and 5 is valid, and is also backed up by the secondary works of Sources 1, 2 and 3. The evidence provided by sources 6 and 7 that suggests Marshall's significance was limited in some ways, is weak when the usefulness of the sources is put under scrutiny, and sources 1, 2 and 3 provide very little evidence to support the arguments which 6 and 7 put forward. Word Count: 1745 Sources Source 1- Black Heroes, Valerie Wilson Wesley and Wade Hudson. Pages 482-487 Source 2- Thurgood Marshall "American Revolutionary", Juan Williams. Source 3- "Warriors Don't Cry"- Melba Patillo Beals Source 4- http://www.thurgoodmarshall.com/gallery/gallery.htm - 8th picture along in the gallery. Source 5- http://www.pbs.org/wnet/supremecourt/rights/print/doc3.html Source 6- http://memory.loc.gov/cgi-bin/ampage?collId=mcc&fileName=052/page.db&recNum=0&itemLink=r?ammem/mcc:@field%28DOCID+@lit%28mcc/052%29%29 Source 7- http://www.notable-quotes.com/a/anarchy_quotes.html ...read more.