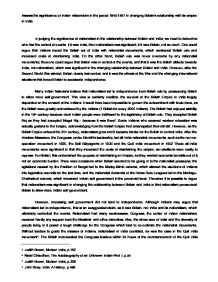 Assess the significance of Indian nationalism in the period 1845-1947 in changing Britains relationship with its empire in India.

Assess the significance of Indian nationalism in the period 1845-1947 in changing Britain's relationship with its empire in India. In judging the significance of nationalism in the relationship between Britain and India, we need to determine who had the control of events. If it was India, then nationalism was significant; if it was Britain, not so much. One could argue that Indians forced the British out of India with nationalist movements, which weakened British rule and increased costs of maintaining India. On the other hand, British rule was never overcome by any nationalist movements; thus one could argue that Britain was in control of the events, and that it was the British attitude towards India, not nationalism, which was significant in the changing relationship between Britain and India. However, after the Second World War started, Britain clearly lost control, and it was the effects of the War and the changing international situations that forced Britain to accelerate Independence. Many Indian historians believe that nationalism led to independence from British rule by pressurizing Britain to allow more self-government. This view is certainly credible; the survival of the British Empire in India largely depended on the consent of the Indians. It would have been impossible to govern the subcontinent with brute force, as the British were greatly outnumbered by the Indians (1 British for every 2000 Indians). The British had enjoyed stability in the 19th century because most Indian people were indifferent to the legitimacy of British rule. ...read more.

Britain could buy Indian resources (such as raw cotton) cheaply, process them in Britain and sell the manufactured produces at a high price to India and other parts of the Empire. However, especially after the First World War, India's industrial manufacture expanded India became more self-sufficient, which replaced goods normally imported by India6 (i.e. British exports to India decreased). Thus, the economic value of India as a colony decreased. It was reasonable for Britain, whose economy was weakened by WW1, to allow more self-government to decrease the expenditure of resources (such as in the 1935 Act)7. Public opinion about the empire had also changed. Previously, the idea of Empire in the minds of the British was associated with the spirit and the practise of flag-waving; that is the British viewed the empire with patriotism, pride and power. Now, the British public had a deeper knowledge of the empire, regrets for some exploits in the past, and a sincere desire to develop the colonies for the benefit of everyone8. Britain would do this by educating the Indians so that they would be competent enough to govern themselves. However, it is important to note that in the 1930s, although the British allowed more self government for India and accepted that British rule in India would not last forever, they were not willing to grant India independence in the immediate future. ...read more.

States, who wanted to trade freely throughout the world by breaking down the Sterling Area, to decide whether the British imperialism was continue. The emerging Cold War rivalry between the United States and the Soviet Union called for high levels of defence spending, which required the reduction of costs by decolonizing. British politics had changed too; imperialism had become incompatible with the modernisation of British politics, and the 'march to democracy' had to involve decolonisation17. In conclusion, nationalism was significant in that it increased the cost of the Empire and encouraged the British to allow more concessions and Indian self government. Despite this, it is clear that Britain was in control in India for most of the time during 1845-1947, and although Britain gave more self-government to Indians, it was given with British consent, not reluctance. Moreover, Britain successfully managed to keep on withholding the grant for independence. Therefore it was the British attitude towards the empire which is the most significant in the relationship between Britain and India. However, Britain lost control of events in India after the commencement of the Second World War, which had a profound effect in accelerating Indian independence, by weakening British economy and British control in India, by forcing Britain to make concessions and by making the British Empire anachronistic in new era of post-war world. Thus, it was the Second World War and its effects, rather than British attitude, which was significant in the last few years of British rule. ...read more.