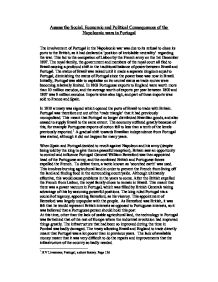 Assess the Social, Economic and Political Consequences of the Napoleonic wars in Portugal

Assess the Social, Economic and Political Consequences of the Napoleonic wars in Portugal The involvement of Portugal in the Napoleonic war was due to its refusal to close its ports to the British, as it had declared a 'position of inviolable neutrality' regarding the war. This led to the occupation of Lisbon by the French army on the 1st December 1807. The royal family, the government and members of the royal court all fled to Brazil causing a profound shift in the traditional balance of power between Brazil and Portugal. The status of Brazil was raised until it made a separate kingdom equal to Portugal, diminishing the status of Portugal since the power base was now in Brazil. Initially, Portugal was able to capitalise on its neutral status as trade routes were becoming relatively limited. In 1803 Portuguese exports to England were worth more than 10 million escudos, and the average worth of exports per year between 1800 and 1807 was 8 million escudos. Imports were also high, and part of these imports was sold to France and Spain. In 1810 a treaty was signed which opened the ports of Brazil to trade with Britain. ...read more.

The political situation before the war was also reasonably stable. The previous monarchs had ruled the country without summoning the Cortes at all, in an absolutist style of government. This means that the monarch has absolute power and control over the country. Liberal groups wanting reform started to group together by the late 18th century for example the freemasons. Although the Peninsular war certainly initiated reform, it is hard to judge the extent to which changes to the style of governing Portugal would have inevitably occurred anyway. At this time, all over Europe liberalism was beginning to spread, and so even without the following events, Portugal may well have eventually adopted these ideals anyway. The council of regency was opposed by a liberal organisation, which sought not only to remove Beresford from his post, but also to achieve a representative, constitutional government. At this time, the Portuguese army was essentially the only active national organisation, and so when their support was given to this movement, its success was assured. Liberals started to stir up unrest against the monarchy, to which officials reacted by arresting large numbers of people. In 1817 General Andrade and 11 accomplices were arrested for treason and were eventually hung. ...read more.

The lack of success of this constitution can be attributed to the fact that it gained as much opposition towards it, as it did support. After the king's brother Miguel was made a Generalissimo of the army, he would later lead a revolt to restore absolutism (he had previously refused to swear to uphold the constitution). This proved to be unsuccessful and led to his exile in France. The constitution was eventually suspended, and Jo�o ruled in the old absolutist style (although perhaps more moderately than before) until he died in 1826. In conclusion the period of time following the Napoleonic Wars was one of great turmoil. The war left Portugal's land damaged, the economy unstable and the people restless. If the treaty allowing trade with Brazil had not been signed, then it is feasible that Portugal could have recovered much more quickly. As it was, however, the loss of income at a time when Portugal needed money most desperately, was a serious blow. If the wars had not occurred, and the royal family had not fled to Brazil, then the style of absolutist governing would have lasted much longer, though the shift to constitutionalism may have eventually occurred anyway. 1 H.V Livermore; Portugal, a short history. Page 136 ...read more.