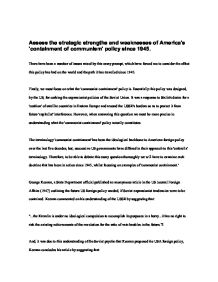 Assess the strategic strengths and weaknesses of America's 'containment of communism' policy since 1945.

Assess the strategic strengths and weaknesses of America's 'containment of communism' policy since 1945. There have been a number of issues raised by this essay prompt, which have forced me to consider the effect this policy has had on the world and the path it has travelled since 1945. Firstly, we must focus on what the 'communist containment' policy is. Essentially this policy was designed, by the US, for curbing the expansionist policies of the Soviet Union. It was a response to Stalin's desire for a 'cushion' of satellite countries in Eastern Europe and around the USSR's borders so as to protect it from future 'capitalist' interference. However, when answering this question we must be more precise in understanding what the 'communist containment' policy actually constitutes. The terminology 'communist containment' has been the ideological backbone to American foreign policy over the last five decades, but, successive US governments have differed in their approach to this 'umbrella' terminology. Therefore, to be able to debate this essay question thoroughly we will have to examine each doctrine that has been in action since 1945, whilst focusing on examples of 'communist containment.' George Keenan, a State Department official published an anonymous article in the US Journal Foreign Affairs (1947) outlining the future US foreign policy needed, if Soviet expansionist tendencies were to be contained. Keenan commented on his understanding of the USSR by suggesting that: "...the Kremlin is under no ideological compulsion to accomplish its purposes in a hurry...it has no right to risk the existing achievements of the revolution for the sake of vain baubles in the future."1 And, it was due to this understanding of the Soviet psyche that Keenan proposed the USA foreign policy, Keenan concludes his article by suggesting that: "...in these circumstances it is clear that the main element of any United States policy toward the Soviet Union must be that of a long term, patient but firm and vigilant containment of Russian expansive tendencies."2 Keenan's conclusions can be seen as the 'ideological foundations' of communist containment. ...read more.

communism) in Asia when you consider the perceived nature of communism and the Japanese geopolitical control of South East Asia in the Second World War. In WWII Japan's control of S.E.Asian countries by the end of the war had doubled. These countries fell quickly and were used to support the military-industry complex needed to facilitate a total war machine. The speed of Japan's expansion alarmed Eisenhower. To apply it to communism he substituted communism for Japan, and saw that if one fell then they would all fall. This is one way of explaining the US involvement in Korea and the future Vietnam war. Once again, we must understand that we are not necessarily concerned with the actualities of the war, this section on Vietnam will focus on the progression of USA policies on Vietnam and communism. Although Eisenhower placed nine hundred military advisors in South Vietnam he refused to escalate American military involvement. Eisenhower's policy of containment was more geared towards using the threat of mass retaliation and the building up of defensive alliances. Paul Kennedy in The Rise and Fall of the Great Powers lists the alliances that the US were a part of during the Eisenhower presidency. By 1954 the Southeast Asia Treaty Organisation (SEATO) was set up whereby, 'the United States joined Britain, France, Australia, New Zealand, the Phillipines, Pakistan and Thailand' to offer each other mutual assistance in combating any aggression in that region. In 1955, in the Middle East, the Baghdad Pact was set up with the aid of the US 'Britain, Turkey, Iraq, Iran, and Pakistan' to provide the same assurances as SEATO. By 1957 the Eisenhower Doctrine was responsible for giving aid to 'Israel, Saudi Arabia, and Jordan' and other Arab states. In 1961 President Kennedy had begun to increase the American military involvement in Vietnam to 16,000 Service people. Kennedy's policy of containment in Vietnam involved the idea of a 'limited' war, a war of counter-interventionism, an intervention which aids the party, not take over the responsibilities of fighting the war. ...read more.