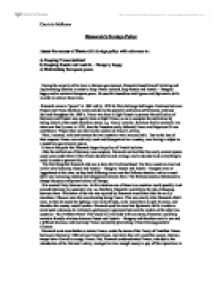 Bismarck's Foreign Policy Assess the success of Bismarck's foreign policy with reference to: a) Keeping France isolated b) Keeping Russia and Austria - Hungary happy c) Maintaining European peace During the majority of his time in German government, Bismarck found himself initiating and implementing schemes in order to keep France isolated, keep Russia and Austria - Hungary happy and to maintain European peace. He used his boundless intelligence and diplomatic skills in order to achieve these aims. Bismarck came to "power" in 1862 and by 1870 his first challenge had begun. Relations between Prussia and France had been weak and due to the potential unification of Germany, relations declined throughout the 1860's. France was keen to fight Prussia to prevent the unification of Germany and Prussia was equally keen to fight France, so as to complete the unification by taking control of the south Germanic states, e.g. Alsace Lorraine. Relations finally reached a low when war finally came in 1870, here the Prussians easily defeated France and Napoleon III was overthrown. Prussia then was able to take control of Alsace Lorraine. Then, it seemed, relations between the two countries were irreconcilable. Due to the loss of their emperor France was relatively weak and disorganized as a country, now having to adjust to a republican government system. It was at this point that Bismarck began his policy of French isolation. After the unification of Germany was complete, Bismarck realized that his newly created system could come under threat if the French decided to seek revenge. ...read more.

that Bulgaria had to split into three, in order to retain the power balance in the Balkans., Serbia, Montenegro and Romania remained independent of Turkey, Austria - Hungary was allowed to occupy Bosnia and Herzegovina, Russia was allowed to take over Bessarabia , Karz and Batum and Britain was allowed to take over Cyprus for use as a naval base. Most countries were happy with this treaty as its main aims had been achieved; the power balance had been restored, there was peace in Europe and France again was isolated (this made Bismarck happy anyway.) Only one thing did not go quite to plan; Russia was very angry as they saw everything they had earned from the treaty of San Stefano slip away. They may have gained land, but so what? This land was insignificant, and they no longer had access to a warm water port. They felt that the congress had been a "European coalition against Russia under the Leadership of Prince Bismarck." The Dreikaiserbund had now fallen apart. After this turn of events Bismarck decided to focus on strengthening relations with Austria -Hungary. They formed a secret Dual Alliance; it was kept secret so as not to upset the Russian Tsar, who already thought that Bismarck's Foreign policies were Anti-Russian, and in the case of being found out, Russia may have taken offence and allied with France. Germany and Austria - Hungary agreed that in the event of an attack from Russia the other country would provide full military support. ...read more.

The second Dreikaiserbund temporarily settled them, but before long the tension between them and Austria -Hungary became unbearable, and it dissolved, pushing them further and further into the arms of France. So much so, that this would lead to an alliance between the two countries later on. But although this did not work out we must consider what an achievement it was that Bismarck managed to contain such tensions during the terms when the treaties did last, between two countries that were so culturally different. For any other diplomat, this is an impossible feat. In respect to peace in Europe Bismarck was very successful. He managed to resolve issues at the Congress of Berlin, which suited the majority of Europe, and so he managed to stabilize its situation and avoid even the concept of war until he resigned and even after that. Due to him there was no conflict in Europe from 1885 (Bulgaria against Serbia) until 1914. So although his treaty was successful it did leave unresolved issues that would ultimately result in the First World War. But how far these agreements go to be useful in the long term is questionable. Particularly as, when, not long after this Bismarck was forced to leave office and his delicate system was left in the clumsy hands of a pompous and clueless Kaiser where it all started to unravel... Bismarck is, to this day, considered to be the most significant German in history, which only partly credits him for his outstanding actions towards a potentially disastrous turn of events. If handled by anyone else German history may have been quite different. ?? ?? ?? ?? Charlotte McKenna ...read more.