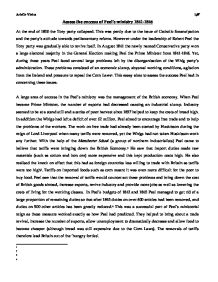 Assess the success of Peel

Assess the success of Peel's ministry 1841-1846 At the end of 1830 the Tory party collapsed. This was partly due to the issue of Catholic Emancipation and the party's attitude towards parliamentary reform. However under the leadership of Robert Peel the Tory party was gradually able to revive itself. In August 1841 the newly named Conservative party won a large electoral majority in the General Election making Peel the Prime Minister from 1841-1846. Yet, during these years Peel faced several large problems left by the disorganisation of the Whig party's administration. These problems consisted of an economic slump, abysmal working conditions, agitation from the Ireland and pressure to repeal the Corn Laws1. This essay aims to assess the success Peel had in concerning these issues. A large area of success in the Peel's ministry was the management of the British economy. When Peel became Prime Minister, the number of exports had decreased causing an industrial slump. Industry seemed to be at a stand still and a series of poor harvest since 1837 helped to keep the costs of bread high. ...read more.

By interfering with the working hours and condition of the factories that these men owned, Peel was afraid that he might lose their support. However in 1842 redundancy reached its peak and a new urgency came into the scenario. Peel was also under strain from Shaftsbury and the Ten Hour Working Movement and was forced into creating the Mine Act of 1842 and later on a revised Factory Act of 1844, in order to improve the working conditions.10 Conversely the credit for these Acts belongs to Shaftsbury rather than Peel, and both of these Acts were severely flawed. Peel was further pressured into looking at the social problems of industrial Britain by Edwin Chadwick and the government had to carry out a Royal Commission into the 'state of large towns and Populous Districts' which produced disturbing findings in 1844 and 1845. 11However, Peel was weighed down by the Corn Laws problems and was not able to take any further action and it was therefore left to the subsequent government to introduce the first Public Health Act of 1848. 12It is evident to therefore say that social reform was not a major success in the ministry of Robert Peel. ...read more.

To conclude Peel's political career was full of striking achievements, first as Irish secretary (1812-1818), then as Home secretary (1822-1830) and finally as Prime Minister, he was able to achieve financial stability, a trade revival, and a start to solving the problems with Ireland. Peel was a truly successful statesman and believed that national interest was more important than party. This is evident in Peel's approach to the Corn Law repeal and the way he resigned when the Conservative refused to back him on his Irish and Corn Law policies all in the name of party politics. However Peel's success varies in the different sectors of his ministry. Peel was most successful in his approach to finance and trade and yet suffered insignificant success in his policies towards Ireland and helping the Irish. Therefore whilst it is important to recognise Peel's administration as a successful one of its time, especially considering the state of the government Peel had to amend after the mismanagement of the Whig party, it is also equally important to acknowledge that Peel's office was not wholly successful. ...read more.