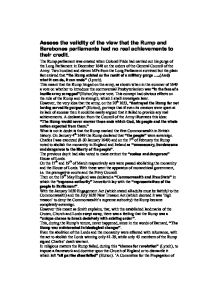 Assess the validity of the view that the Rump and Barebones parliaments had no real achievements to their credit.

Assess the validity of the view that the Rump and Barebones parliaments had no real achievements to their credit. The Rump parliament was created when Colonel Pride had carried out his purge of the Long Parliament in December 1648 on the orders of the General Council of the Army. Two hundred and eleven MPs from the Long Parliament survived but the plain fact existed that "the Rump existed as the result of a military purge .....(And) what it can do, it can undo" (Lynch). This meant that the Rump hinged on the army, as shown when in the summer of 1649 a vote on whether to introduce the controversial Presbyterianism was "in the face of a hostile army scrapped"(Hutton) by one vote. This concept had obvious effects on the rule of the Rump and its strength, which I shall investigate later. However, the very idea that the army, on the 20th 1653, "destroyed the Rump for not having served its purpose" (Hutton), portrays that if even its creators were upset at its lack of success then it could be easily argued that it failed to provide any real achievements. A declaration from the Council of the Army illustrates this idea: "The Rump would never answer those ends which God, his people and the whole nation expected from them." What is not in doubt is that the Rump marked the first Commonwealth in British history. On January 4th 1649 the Rump declared that "the people" were sovereign. Charles I was executed (8-30 January 1649) and on the 7th of February the Rump voted to abolish the monarchy in England and Ireland as "unnecessary, burdensome and dangerous to the liberty of the people". The previous day it had also voted to make extinct the "useless and dangerous" House of Lords. On the 17th and 19th of March respectively acts were passed abolishing the monarchy and the House of Lords. With these went the apparatus of monarchical government, i.e. the prerogative courts and the Privy Council. ...read more.

However, Charles proceeded to lead a force of about 13,000 men into England, bypassing Cromwell. Exactly a year after Dunbar Cromwell finally caught up with him at Worcester and again wiped out the threat to the Commonwealth. Thus by September 1651 Cromwell and the Rump were firmly in control of Ireland and Scotland. Successive English kings had tried and failed to conquer Scotland yet now it fell. Even Ireland, where previous governments had needed a decade to overcome a single chief was overwhelmed as well. "National security was assured and the royalist threat eradicated" (Woolrych). Scotland and Ireland achieved closer formal union with England by the way of the 1651 declaration for the incorporation of Scotland into the single Commonwealth with England, and the 1652 Act for the Settlement of Ireland. Although the actual ordinances for union were not until after the Rump's dissolution, the "foundations were laid during the rule of the Commonwealth" (Coward). England also flourished abroad. The 1651 Navigation Act stipulated that goods imported into England should henceforth be carried either in English ships or in ships belonging to the country of origin. The move was clearly aimed at the Dutch, the Rump eager to strike "a blow against England's major commercial rival" (Lynch). What followed in 1652 was the Anglo-Dutch War, and largely due to "the beginnings of the development of a powerful navy by the Commonwealth" (Coward) the Rump's newspaper had "unending series of victories to report" (Hutton). Thus the Rump, by it military successes not only provided national security, but earned international respectability due to its "might abroad" (Hutton). In great contrast to the commercial and foreign policies of early Stuart monarchs the Commonwealth followed "dynamic policies that enabled the subsequent diplomatic achievements of the Protectorate" (Coward). At the time many felt the reason for the military success was because Divine Providence favoured the Commonwealth, as pointed out by pamphleteers Aschaum and Rous. ...read more.

The ridiculers of the Barebones "allowed prejudice to distort their analysis" (Barnard). In just over a five-month period, the Barebones Parliament passed over 30 statutes and many other bills were in the pipeline when it ended it December 1653. Most progress was made on law reform. Acts were passed for the relief of creditors and poor prisoners, while civil marriages carried out by JPs were legalised. To fill the gap left by the collapse of the church courts; machinery was established for the probate of wills and for registering births, marriages and deaths. Even more wide ranging law reforms were being drafted, taking up many of the Hale Commission recommendations (thus being another achievement of the Rump). Measures were also proposed to rationalise the revenue system including the abolition of the hated excise and an act was passed to regulate the conditions under which idiots and lunatics were kept. The Barebones continued bringing Scotland even further under English control, while in Ireland lands confiscated from Catholic rebels were bestowed on the soldiers whom had served there and on civilians who had paid for the island's re-conquest. "The spate of legislation has led to praise of the Parliament" (Barnard). When concluding on whether the Barebones parliament achieved anything of note it is important to study its aims. As I have already written, Cromwell set up the Parliament to achieve an interim period of government until new elections could be held. While this did not occur, the Barebones "did go some way towards meeting Cromwell's hopes" (Coward). There was "enough" (Smith) reforms to satisfy radicals and enough well ordered government to convince rulers of the counties that the republic merited support. Thus the Barebones, because of its divisions and short period as government struggled to make a massive difference, they did achieve various things, as outlined above, of note. The Rump, in my view, went even further than this, and while it had its doubters, achieved "more than its fair share" (Coward) during its period of office. ...read more.