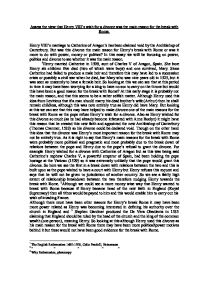 Assess the view that Henry VIII's wish for a divorce was the main reason for the break with Rome.

Assess the view that Henry VIII's wish for a divorce was the main reason for the break with Rome. Henry VIII's marriage to Catherine of Aragon's has been claimed void by the Archbishop of Canterbury. But was this divorce the main reason for Henry's break with Rome or was it more to do with power, money or politics? In this essay we will be focusing on power, politics and divorce to see whether it was the main reason. 1Henry married Catherine in 1509, aunt of Charles V of Aragon, Spain. She bore Henry six children five died (two of which were boys) and one survived, Mary. Since Catherine had failed to produce a male heir and therefore this may have led to a succession crisis or possibly a civil war when he died, bar Mary who was nine years old in 1525, but it was seen as unseemly to have a female heir. So looking at this we can see that at this period in time it may have been worrying for a king to have no son to carry on the throne but would this have been a good reason for the break with Rome? At this early stage it is probably not the main reason, and that this seems to be a rather selfish matter. Although Henry used this idea from Leviticus that if a man should marry his dead brother's wife (Arthur) ...read more.

After the Reformation, Henry became sole authority and was immediately concerned that the Catholic Church in England had developed into a 4'state within a state' due to its tax privileges, won courts. Henry wished to control this 'state', as he wanted sole power on everything within his country. So looking at this evidence it could be said that this idea of divorce being the most important reason for the break with Rome in Henry's mind might not be entirely true. As looking at this evidence we see that his advisors may have influenced Henry into think that he should be supreme leader of England and rule over everything including the religion. This is strong evidence that Henrys divorce with Catherine was probably not as important as it seems as Henry's ideas were more to do with power and rule over his country and so therefore would need to break with Rome to become supreme ruler, but then, why divorce Catherine? The wealth of the church was another political reason for Henry's decision to break from Rome. The king was always in desperate need for money and Henry himself was always short of money. The wealth and land of the church were therefore obvious targets, particularly when Thomas Cromwell reminded Henry of them. The church owned lots of the farming land in England. Henry knew that if he could become head of the church then he would own this. ...read more.

The state of the pre-reformation church was not the key reason for the Reformation because, on the whole, the church may not have been as corrupt as it seemed. However, it would have been a background factor for Henry's 'reform-mindedness'. Henry used this idea of the church being corrupt as an excuse to reform the church and appoint himself 'Supreme Head'. Money and ultimately power would have been an encouraging factor for Henry to break with Rome. He probably realised that if he could run the church for his own benefit then it would certainly increase his wealth. Henry knew that the sale of church lands to the laity might induce them to become enthusiastic supporters of the government's policies. They would have much to gain if the power and wealth of the church were broken. Again we can see that the sale of land for money was not the true reason. The real reason was that he wanted as many people to support his decision to divorce Catherine and this meant offering them incentives to support him - for example inexpensive church land. Henry realised this would make him more powerful, but as devote Catholic his personal greed would not have been a strong enough reason to break from the Pope. His need to secure his followers would have been strong enough. 1 The English Reformation 1485-1558, Colin Pendrill, Heinemann 2 " " " " " 3 Why Reformation, photocopy 4 The English Reformation 1485-1558, Colin Pendrill, Heinemann 5 www.historychannel.com/as/history 6 Legislation of Henry VIII photocopy 7 The English Reformation 1485-1555 G.R.Elton ...read more.