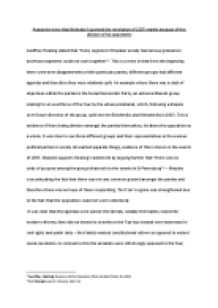 ﻿Assess the view that Nicholas II survived the revolution of 1905 mainly because of the division of his opponents Geoffrey Hosking stated that ?Every segment of Russian society had serious grievances but those segments could not work together?[1]. This is correct in that from the beginning there were even disagreements within particular parties; different groups had different agendas and therefore they were relatively split. An example where there was a clash of objectives within the parties is the Social Democratic Party; an extreme Marxist group looking for an overthrow of the Tsar by the urban proletariat, which, following a dispute over future direction of the group, split into the Bolsheviks and Mensheviks in 1903. This is evidence of there being division amongst the parties themselves, let alone the opposition as a whole. It was clear to see those different groups and their representatives in the various political parties in society all wanted separate things; evidence of this is shown in the events of 1905. Marples supports Hosking?s statement by arguing further that ?there was no unity of purpose among the groups that took to the streets in St Petersburg?[2] ? Marples is accentuating the fact that there was not any common ground amongst the parties and therefore there was no hope of them cooperating. ...read more.

It was evident that the groups seeking change were a diverse and very loose coalition, if united at all; they were all behaving differently, in different parts of Russia and this accentuates the division further. The urban workers, who had increased, due to the loan from France, were unsatisfied with the duma; it did not implement changes that they so desperately wanted. They were looking to improve working conditions and receive higher pay; so in order to make an impact they went on strike in late December in Russia?s capital, led by Gapon, and soon enough it became a general strike, with 85% of the workforce getting involved by early January. The rebellion continued after the events of Bloody Sunday, causing even more strikes. Figes writes in support of the hypothesis stating that the opposition ?had all followed their own separate rhythms and failed to combine politically?[4]. This is showing the extent to which they lacked unified coordination. Evidence in support of this is shown is events of 1905. All the parties had different agendas and as a result disagreed more amongst themselves than with the tsar itself; notably the liberals, Mensheviks, Bolsheviks and the Social Revolutionaries. ...read more.