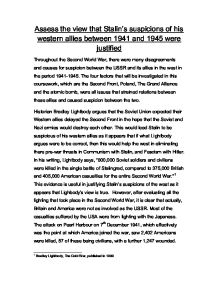 Assess the view that Stalin's suspicions of his western allies between 1941 and 1945 were justified Throughout the Second World War, there were many disagreements and causes for suspicion between the USSR and its allies in the west in the period 1941-1945. The four factors that will be investigated in this coursework, which are the Second Front, Poland, The Grand Alliance and the atomic bomb, were all issues that strained relations between these allies and caused suspicion between the two. Historian Bradley Lightbody argues that the Soviet Union expected their Western allies delayed the Second Front in the hope that the Soviet and Nazi armies would destroy each other. This would lead Stalin to be suspicious of his western allies as it appears that if what Lightbody argues were to be correct, then this would help the west in eliminating there pre-war threats in Communism with Stalin, and Fascism with Hitler. In his writing, Lightbody says, "800,000 Soviet soldiers and civilians were killed in the single battle of Stalingrad, compared to 375,000 British and 405,000 American casualties for the entire Second World War."1 This evidence is useful in justifying Stalin's suspicions of the west as it appears that Lighbody's view is true. However, after evaluating all the fighting that took place in the Second World War, it is clear that actually, Britain and America were not as involved as the USSR. Most of the casualties suffered by the USA were from fighting with the Japanese. ...read more.

and Taylor Downing strongly challenge this when they describe the actions of the Red Army in Poland in 1944 and argue that the hopes for post-war independence for Poland were crushed by Stalin. They argue their view that hopes for genuine democracy in Eastern Europe after the war was destroyed in the ruins of Warsaw. They give their evidence in their writing by saying, "the Soviet troops unexpectedly waited at the Vistula River, and allowed the Nazis to return and crush the Poles."5 This therefore adds weight to the argument that Stalin cannot be suspicious of his western allies as he is doing as much harm to the hopes of independence for Poland at the end of the war, as much as he thinks the west are doing as well. It must also be considered that a defenceless Poland would be easier for Stalin to control post-war, but since this is for personal gain it cannot be justified. It appears that after evaluating both arguments in this factor, it would seem that Isaacs and Downing are most credible because although Fitzgerald can give more evidence in his reasoning for Stalin's suspicions, he does not consider the damage that Stalin himself is doing to the situation and for this lack of consideration this is why Isaacs and Downing are more credible in their argument. Historian Scott Harrison argues that the alliance between the USSR and the Western Powers was liable to collapse in 1945. If the given view is true then one would assume that perhaps the west would purposely affect relations with the USSR as the alliance was only a marriage of convenience. ...read more.

It must also be considered that although America say the bomb was used to defeat Japan, the United States immediately attempted to turn the atom bomb to diplomatic advantage. Historian Oliver Edwards strongly challenges this with the view that the bomb was dropped because the Americans didn't want to spend the money on developing it without testing it, and because it would defeat Japan. Stalin had known that the reason in which the USA had entered the war was for the Japanese attack on Pearl Harbour, meaning that the main enemy from the American point of view was the Japanese. Although by May 1945, Germany had surrendered in the war, there was still fighting going on between the USA and Japan, for example the Battle of Okinawa. In his writing Edwards says, "the bomb was dropped because $2 billion had been invested in its development and because it was seen as the best means of defeating the Japanese."10 The bombs dropped on the 6th August and 9th August 1945 at Hiroshima and Nagasaki forced the Japanese to surrender and it was for this sole reason that the bombs were dropped. When one considers the arguments the historians have given, the common theme appears that Stalin could not be justified in his suspicions of the west. This view is more convincing, not only because the historians have given better evidence or considered more events that could alter any suspicions Stalin might have, but also because Stalin himself acted in ways that were just as bad if not worse than the west, which cannot justify his suspicions of his western allies in the period 1941-1945. ...read more.

This is an interesting essay that considers all the key issues in the tensions of the Grand Alliance during WW2. Historiography is well understood and adds weight to the debate although at times, more evidence is needed to fully evaluate it. 4 out of 5 stars.