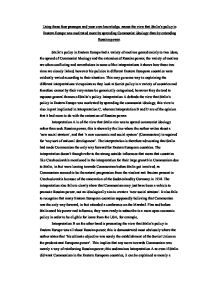 Assess the view that Stalin's policy in Eastern Europe was motivated more by spreading Communist ideology than by extending Russian power.

Using these four passages and your own knowledge, assess the view that Stalin's policy in Eastern Europe was motivated more by spreading Communist ideology than by extending Russian power. Stalin's policy in Eastern Europe had a variety of motives geared mainly to two ideas, the spread of Communist Ideology and the extension of Russian power, the variety of motives are often conflicting and nevertheless in some of the interpretations it shows how these two aims are closely linked, however his policies in different Eastern European countries were evidently varied according to their situation. This may go some way to explaining the different interpretations viewpoints as they look at Soviet policy in a variety of countries and therefore cannot by their very nature be generically categorised, however they do tend to espouse general themes of Stalin's policy. Interpretation A defends the view that Stalin's policy in Eastern Europe was motivated by spreading the communist ideology, this view is also in part implicated in Interpretation C, whereas Interpretation B and D are of the opinion that it had more to do with the extension of Russian power. Interpretation A is of the view that Stalin aim was to spread communist ideology rather than seek Russian power, this is shown by the line where the author writes about a 'new social stratum', and that 'a new economic and social system' (Communism) is required for 'any sort of national development'. The interpretation is therefore advocating that Stalin had made Communism the only way forward for Eastern European countries. ...read more.

them up with the political nous to lever them into government, this shows that Stalin was not just interested in extending Russian power but instead was more interested in a general spread and nurturing of Communist belief, by having these friendly regimes that he effectively had set up he was not trying to exert Russian power but instead was waging an ideological war on the West. The interpretation highlights this but it is in contrast to the very start of the interpretation which seems to contradict the rest of the interpretation or perhaps put it in a very different light, the author writes that the Soviet Union followed a single blueprint to create a series of client regimes in their sphere of influence, this would very much suggest a leaning toward Stalin's policy being about Russian power and the degrading of Eastern Europe to mere puppets of the soviet union. This view is certainly backed up by some of the events of the time, for example the boycott of the Marshall plan by all East European communist bloc countries. Interpretation D is among the interpretations the greatest advocate of Stalin's policy in Eastern Europe being about Russian power and more specifically about an imperial expansionist foreign policy. It explains 'Soviet policy simply by looking at the policies of the Tsars'. Its claim at the start that to understand the Communist regime in Russia, we have to first understand its ideological ambitions is then followed by suggesting that this ideological ambition was nothing to do with the Bolshevik doctrine the core of Communist expansionism but instead could be ...read more.

he may have just taken the opportunities available to him and exploited the fact that he had, by virtue of the percentages agreement been handed over. It can also be argued post 1947, that his policies were simply a reaction to the aggressiveness of the Marshall Plan as it can be seen afterwards that he tries to consolidate the Eastern European bloc in economic and political terms with the creation of Cominform and Comintern. Thus Stalin although having a general plan of protecting Soviet economic and military interests may not have had an over arching political plan for Eastern Europe. Thus, Interpretation A and C although promoting the idea of Stalin spreading Communist ideology, provide no significant evidence to battle off the claims that in fact this spreading of Communist Ideology was not just a method of transition to a more powerful and influential Russia. By the same token Interpretation B and D don't take into account that it may just have been a reactive policy to the West trying to damage the Soviet economic and political position through the Marshall Plan. Therefore, it is hard to separate the idea of spreading the communist ideology from the extension of Russian power, as they are in a symbiotic relationship, whereby one will always feed into the other, on the other hand, the spreading of Communist power creating a large Soviet sphere of influence, put together with the fact that Stalin evidently had imperial expansionist ideas naturally leads to the conclusion that the extension of Russian power was almost certainly the dominant motive for Stalin's policy in Eastern Europe. ...read more.