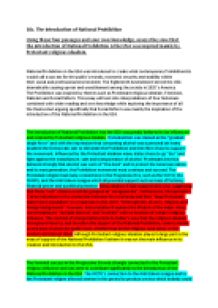 Due to lack of ?legal remedies? the women of 1920?s America needed a voice and the National Prohibition would assist that scheme. I believe that the Feminist progression before and during the National Prohibition was a colossal victory for the roles and importance of women in this period but the challenge of the Prohibition was merely a tool to gain power and not the WCTU?s main aim. The introduction of the National Prohibition in the USA was supported but not influenced by the women of WCTU. Nativism or anti-immigration was a serious issue for all social groups including the feminists within America in the 1920s, many saw this concern as a main cause of the introduction of National Prohibition into the USA. Nativism was seen throughout the Protestant religion, Feminism and society. As foreigners infiltrated America the Protestant religion feared for the increase in Roman Catholics. Congress was asked to limit the immigrants? right to vote due to fear of new religious idealism and impurity of the public. The White Anglo-Saxon Protestants (WASPs) are a good example of that American purity, they represented the high-status members of the public. ...read more.

Interpretations A, B and C support the need of Social Reform in the late 1910?s. Social Reform in America needed to boost the mentality of the public, reunite the independence and strength of the American workforce, decrease the fear of crime and vice within the major cities and keep immigration at a minimum to maintain purity and avoid interracial marriages and offspring. This was the inspiration for the introduction of National Prohibition into the USA. Social reform desired a phenomenal movement that would stir the American public into a new generation. Within social reform is the aspects of Protestant religion, women?s rights and nativism which all combined could have changed the American culture permanently via the National Prohibition. If the Prohibition had succeeded in gaining a majority of ?dry? states, the major cities would be rid of the extravagant number of saloons, brothels etc. allowing a more efficient and eager workforce and therefore sustaining American power and position over Europe. Consequently reducing the number of immigrants as less jobs would be available and the Protestants within America would have less fear over the cultural development of the Roman Catholicism into the USA. To conclude, it can be argued that Social Reform was the inspiration for the introduction of National Prohibition into the USA. ...read more.