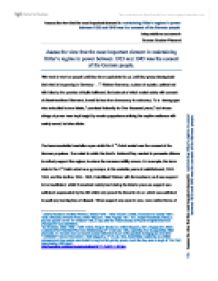 Assess the view that the most important element in maintaining Hitler's regime in power between 1933 and 1945 was the consent of the German people.

Assess the view that the most important element in maintaining Hitler's regime in power between 1933 and 1945 was the consent of the German people. 'We want to work on people until they have capitulated to us, until they grasp ideologically that what is happening in Germany ...'1. Weimar Germany, a place of squalor; painted red with bliss by the promise of idyllic fulfilment, the bedrock of which rested solely with consent of disenfranchised Germans, turned its face from democracy to autocracy. To a demagogue who embodied human ideals,2 promised fraternity for One-thousand years,3 but whose strings of power were kept taught by master puppeteers enticing the captive audience with mainly carrot; but also sticks. ...read more.

The extent to which the german population supported the nazi regime can be inferred from the amount of resistance in wiermar. This within itself requires a definition of 'resistance', which Nazi perceptions of differ from today conventional view. The support within Wiermar can be inferred from resistance against the ragime, as no legitimate elections were held after 1933. * the consent of the people was paramount * Different sources suggest different methods for keeping the control * (Source A and D) suggest that Germans were pre-orientated towards a strong leader. This meant that they could use less coercive tactics. However his allowed the Nazi's to radicalise; as the more extreme policies were accepted, this allowed even more radical policies to be introduced ( the final solution) ...read more.