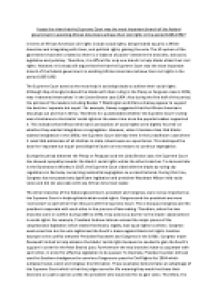 Assess the view that the Supreme Court was the most important branch of the federal government in assisting African Americans achieve their civil rights in the period 1865-1992?

Congress overturned him but his veto legitimised the South?s stance against black civil rights. Another example is the conflict between President Roosevelt and Congress in the 1930s. Congress made Roosevelt limited to help advance the blacks? social rights because he needed to gain the South?s support in order for the New Deal to pass. Furthermore the two branches have to cooperate with each other, in order for effective legislation to be passed. To illustrate, President Lyndon Johnson used his Southern background to convince Congress to pass the Civil Rights Act 1964 which outlawed racial, sexist and religious discrimination. These examples demonstrates an advantage of the Supreme Court which is that the judges serve for life meaning they would not base their decisions on public opinion unlike the president who would do this to gain votes. Therefore, the white southerners will have less influence on the Supreme Court unlike the president and Congress. This may explain why they provided a ruling which was favourable to the African Americans, in the Buchanan vs Warley where racism was still clearly present. The Supreme Court does not have to rely on the other branches? support to help the blacks attain social rights. ...read more.

To demonstrate, in the 1938 Guinn vs Canada case, the Supreme Court ruled that ?separate but equal? must really be equal. Furthermore, in the Guinn vs US case, the grandfather clause was ruled as unconstitutional. The grandfather clause was where people were only granted the vote if their fathers or grandfathers had voted before the 15th Amendment. These examples further demonstrate that the Supreme Court have displayed their support towards African Americans? political rights, unlike the other two branches who have a long period of inactivity. In conclusion, although Congress and the president acted as a significant help to the African Americans during the 1950s and 1960s, both branches were too inactive for long period of time to be classed as the most important. Congress was heavily dominated by the Southern Democrats which constrained the president from assisting the blacks due to fears of losing support. In contrast, the Supreme Court was less influenced by the other two branches, meaning they were able provide favourable verdicts towards the blacks from as early as 1900. The conflicts between the other branches prevented them from passing significant legislation during the first half of the period. Hence that the Supreme Court was the most important branch of the federal government in assisting African Americans achieve their civil rights in the period 1865-1992. ...read more.