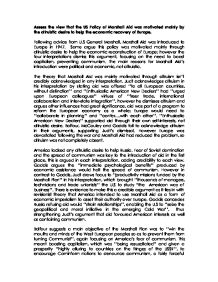 Assess the view that the US Policy of Marshall Aid was motivated mainly by the altruistic desire to help the economic recovery of Europe.

Assess the view that the US Policy of Marshall Aid was motivated mainly by the altruistic desire to help the economic recovery of Europe. Following advice from U.S General Marshall, Marshall Aid was introduced to Europe in 1947. Some argue this policy was motivated mainly through altruistic desire to help the economic reconstruction of Europe; however the four interpretations dismiss this argument, focusing on the need to boost capitalism, preventing communism. The main reasons for Marshall Aid's introduction were political and economic, not altruistic. The theory that Marshall Aid was mainly motivated through altruism isn't credibly acknowledged in any interpretation. Judt acknowledges altruism in his interpretation by stating aid was offered ''to all European countries, without distinction'' and ''Enthusiastic American New Dealers'' had ''urged upon European colleagues'' virtues of ''freer trade, international collaboration and inter-state integration'', however he dismisses altruism and argues other influences had great significance, aid was part of a program to reform the European economy as a whole; Europe would need to ''collaborate in planning'' and ''confer....with each other''. ''Enthusiastic American New Dealers'' supported aid through their own self-interests, not altruistic desire. Balfour, McCauley and Gaddis fail to acknowledge altruism in their arguments, supporting Judt's dismissal. ...read more.

Washington believed that reestablishment of multilateral trade was key to boosting the economy, the ''protective device'' of aid intended European countries to switch ''from the bilateral to the multilateral as soon as possible''. McCauley references the benefits of multilateral collaboration throughout his interpretation, strengthening Judt's argument that economic reasons were the main motivation behind Marshall Aid. The subsequent boom led to an economic divide as obvious as the political one, with the rich West and poor East. European markets had exceeded pre-war levels of production and income by the 1950's, reducing the influence of the communists and verifying Ryan's argument that Marshall Aid would negate the appeal of communism. The West had no incentive to turn communist now it was booming. All four interpretations agree Marshall Aid would gain popularity if it would have a negative impact on communism. Gaddis outlines the greatest threat to the West wasn't military intervention, rather ''the risk that hunger, poverty and despair might cause Europeans to vote their own communists into office'', who would ''obediently serve Moscow's wishes'', this is a credible argument because communism was benefitting with many European economies bankrupt - Soviet domination was a real danger. ...read more.

However Balfour goes on to concede that other events had greater significance, such as differing ideologies and fear of communism. Since Truman didn't want war in election year, these two factors combined dismiss this view. Several motivational factors were involved in implementing the Marshall Plan. A plan to boost capitalism, argued by Balfour, the economic concerns argued by Judt, and argued by McCauley and Gaddis to be interlinked with political concerns, along with hints of militarism and altruism. However, Gaddis' argument that the US was following a political grand strategy through economic means, and the interlinking economic concerns established by McCauley reference the greatest motivational theory, along with the differing ideologies between U.S and USSR, implied by Judt and Balfour. The Marshall Plan wasn't motivated through altruistic desire to help Europe, despite Churchill's statement that it was ''the most unsordid act in history''5 1 How successful was the Marshall Plan? - Scott Newton, History Today (2000) 2 David Ryan, The United States and Europe in the Twentieth Century (2003) 3 David Ryan, The United States and Europe in the Twentieth Century (2003) 4 The Marshall Plan reconsidered: A complex of Motives - Diane Kunz (1997) p162, 9pgs 5 The American Past, A Study of American History. Joseph Conlin (2009) p. 724 ?? ?? ?? ?? ...read more.