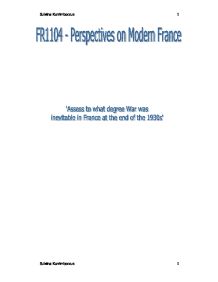 "Assess to what degree war was inevitable in France at the end of the 1930s" The History of France during these years carries a sharply defined and painful ending, in which most writings and critics have been dominated by the successful German invasion events and defeat of 1940. In most cases, it has been argued that the Third Republic (1870-1940) was responsible for a devastating political conflict and resulted in weak indecisive governments in France; this major insecurity almost doomed France to defeat before the war even began. Philippe Petain was one of the many politicians, polemicists and writers of the Right who shared a common thesis on the French national decadence, suggesting that France was a nation under the weak and irresolute democracy of the Third Republic which was powerless. This government was thought of no longer being able to keep pace with the allegedly more dynamic and successful societies of Nazi Germany and Fascist Italy. However I would argue that there is a lack of tolerance in this thought, as this political and social organization could not only be the one responsible for the defeat of France in the Second World War. In fact many other factors were linked such as the strong and well prepared Germany of Hitler, and mainly the built up of disputes present between allied countries at the end of the First World War. In my opinion the Third Republic did sufficiently well considering the post-war state in which France was trying to recover from, for instance the short-lived government of Leon Blum 'Le Front Populaire' left behind the essential foundation of social laws still present at this time. ...read more.

In fact the creation of the Front Populaire was facilitated by the economic crisis at the time, the internal threat from the far Right as well as the international fascist menace and threat of war. As a result in May 1936 at the national elections the Front Populaire was voted with sufficient seats to form a government, and in a few weeks time the Front Populaire has made a great impact both socially and economically. The introduction of new laws with the extension of scholar education, 'Les Accords Matignon' for workers in 1936 participated to a controversy, it included up to fifteen days holiday pay, a maximum of forty hours per week and an increase in wages of approximately 12 to 15%, Leon Blum the main president of the Front Populaire created the SNCF which enabled the working class the privilege of travelling and also gave workers free access to the 'Musee du Louvres' in Paris. This ambitious programme of social reform did not only occurred as a threat for the French bourgeoisie of that time but soon headed to a collapse in the light of internal crises and growing tensions in Europe. Although the main factors that lead to a decline in the Front Populaire seemed to be the reaction of the violent Right-wing opposition linked with the economical complexity of France's inflation and an angry bourgeoisie; I feel that the major impact responsible for the end of Leon Blum's government was the disillusionment of the Left due to the foreign policy France had towards Spain. ...read more.

In other words the film lucratively recalls the chaos of France in the 1930s as well as the international turmoil which predicts in retrospect, another war to come. As a conclusion it has been demonstrated throughout this essay that a suggestion of war in the 1930s was inevitable in the light of many factors that contributed to a common resulting disaster. The period of the Third Republic in France caused a lot of disorder and conflict within France itself but also provoked disputes with other countries in which for instance the 'Treaty of Versailles' signed in 1919 left Germany with a heinous feeling, all these disagreements built upon each other to revive the hate and reason why the First World War happened and therefore allied countries had to act in violence once again in the attempt to solve these indifferences. I tried to argue within this essay that the result of the Second World War was mainly due to an unfinished World War I in which countries were left dissatisfied as well as traumatised and destroyed; in the same way France was likely to be part of this disaster in response to a social, economical and political state in which France became a chaotic, confused and unstable country in the 1930s. Therefore I would finish this essay on the thought that France cannot be made responsible for this predestined war in the end of the 1930s, but on the other hand effectively contributed to an inevitable tragedy that marked the most cruel World History. ...read more.