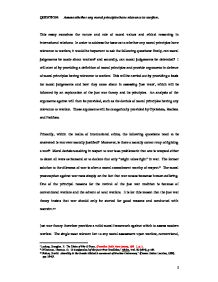 Assess whether any moral principles have relevance to warfare.

most wars past and present have been unjust since they have caused substantial civilian casualties.VIII The principles of just war tradition therefore incorporate legitimate targets. The principle of double-effect has enabled modern just war theorists to carry out acts, which are not morally permissible, provided that the act is carried out in the sake of good effects, legitimate result, that the consequences are unintentional and not disproportionate to the good aimed at. The Just war principles also incur that the decision to engage in war must be enacted by the appropriate authorities, according to the proper process. A state may resort to war only if it has exhausted all plausible, peaceful alternatives, legitimate means, to resolving the conflict in question, in particular diplomatic negotiation. Thus, International agreements have led to a clarification of natural precepts, and made certain what the laws of humanity would leave uncertain, and made definite and particular what the law of nature contained only in a general way.IX The core proposition of just war theory is that, sometimes, states can have moral justification for resorting to armed force in the international system. ...read more.

Civilians right to life may be outweighed by national objectives, provided those objectives are morally acceptable.XII What these examples suggests is that situations can arise in which there is a clash between the moral requirement to prevent evil, if it is readily in our power to do so, and the duty to refrain from killing the innocent. In addition, that if the only way to prevent a much greater harm, is to take life, this may be morally licit and even right. Moreover, traditional double effect cannot plausibly be invoked to disguise the fact that alleged absolute moral rule has thereby been breached.XIII The main discourse of this essay is therefore dominated by three major traditions of thought: optimism, realism and pacifism. The interaction between these three traditions thus structures the contemporary discussion of wartime issues. The rules of Just war theory provide a rational framework for moral reflections on war.XIV Just war theory has been recognized and widely used in the twenty-first century in an attempt to limit the horrors of war. It has been also incorporated into international law through the United Nations Charter, the Nuremberg Charter, and the International Court of Justice. Generally construed, just war theory consists of two basic categories: jus ad bellum and jus in bello. ...read more.