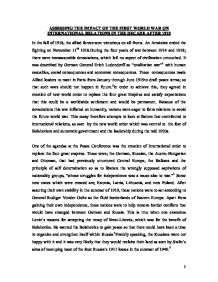 ASSESSING THE IMPACT OF THE FIRST WORLD WAR ON INTERNATIONAL RELATIONS IN THE DECADE AFTER 1918 In the fall of 1918, the allied forces won victorious on all fronts. An Armistice ended the fighting on November 11th 1918.During the four years of war between 1914 and 1918; there were immeasurable devastations, which left no aspect of civilization untouched. It was described by German General Erich Ludendorff as "totalitarian war"1 with human casualties, social consequences and economic consequences. These consequences made Allied leaders to meet in Paris from January through June 1919to draft peace terms; so that such wars should not happen in future.2In order to achieve this, they agreed in creation of new world order to replace the four great Empires and satisfy expectations that this could be a worldwide settlement and would be permanent. Because of the devastations this war inflicted on humanity, nations were eager to form relations to avoid the future world war. This essay therefore attempts to look at factors that contributed to international relations, as seen by the new world order which was central to the fear of Bolshevism and autocratic government and the leadership during the mid 1920s. One of the agendas at the Peace Conference was the creation of International order to replace the four great empires. ...read more.

Because of their disorganization and little support they received from workers, the Bolsheviks used this weakness, successfully won, and established themselves. The triumph of the Bolsheviks created a second European center of attraction and aspiration. There was fear of Bolshevisms and this made premier Clemenceau to understand that a harsh peace with Germany would spread Bolshevism into Germany.13 Even though the relationship between Germany and the Allied nations was not good during this period of time, there were also some Germans who were asked by Allied nations to volunteer themselves under Rudiger Vonder Goltz to remain in the borderlands of Eastern European 1919.These acted as de facto allies of the western powers against Bolsheviks.14From this, it can be deduced that the fear of the Bolsheviks was bringing nations together. According to historians, the first five years after the war were years of hostility between Allied nations and Germany. Because of these Bolsheviks, Germany even volunteered herself to work hand in hand with Allied nations to avoid spread of Communism. This shows that despite the hostility that was there, they all had a common enemy to fight against and this eventually brought them close to the Allied nations. The change in leadership helped to ease international tensions which were there before 1924.The period between1918 and 1924 can be described as a period of tensions which would have disturbed the relationship among nations in the aftermath of world war One. ...read more.