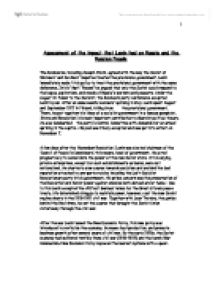 Assessment of the impact that Lenin had on Russia and the Russian People The Bolsheviks, including Joseph Stalin, agreed with the way the Soviet of Workers' and Soldiers' Deputies treated the provisional government. Lenin immediately made it his policy to treat the provisional government with the same deference. In his "April Theses" he argued that only the Soviet could respond to the hopes, aspirations, and needs of Russia's workers and peasants. Under the slogan "All Power to the Soviets", the Bolshevik party conference accepted Lenin's plan. After an unsuccessful workers' uprising in July, Lenin spent August and September 1917 in Finland, hiding from the provisional government. There, he put together his ideas of a socialist government in a famous pamphlet, 'State and Revolution', his most important contribution to Marxist political theory. He also bombarded the party's Central Committee with demands for an armed uprising in the capital. ...read more.

After the war Lenin issued the New Economic Policy, this new policy was introduced to revitalise the economy, increase food production, and promote business growth after several years of civil war. By the early 1920s, the Soviet economy had suffered terribly from civil war (1918-1922) and the harsh War Communism. New Economic Policy replaced the market systems with a quasi-military economic structure. In 1920 industrial output was at less than one-seventh of its level before the revolution. Low grain production in 1920 and 1921 led to a famine in which about five million people died. New Economic Policy was intended to revitalise the country's economy by liberalising trade and production in agriculture and industry. In place of government seizure of surplus output from peasants, New Economic Policy allowed farmers to sell their produce on the open market after paying a tax proportional to their net output. ...read more.

viewed the activities of peasants and Nepmen as a threat to the socialist state, The first of three strokes put Lenin out of action in May 1922. He recovered somewhat, but never again assumed an active role in the government or the party. After a partial recovery in late 1922, he suffered a second stroke in March 1923, which robbed him of speech and effectively ended his political career. Lenin died in the village of Gorky, just outside of Moscow, on January 21, 1924. Although not an extraordinary philosopher, Lenin was a brilliant revolutionary thinker and strategist, whose clear-sighted realism guided the Bolsheviks to seize and maintain power. He did not formulate any one solution to the dilemma of how to build a workers' state in a peasant society. His interpreters and critics differ. Most observers see a connection between Lenin's early ideas and those of Stalin but agree that Lenin was the foremost revolutionary figure of 20th-century. ?? ?? ?? ?? 1 ...read more.