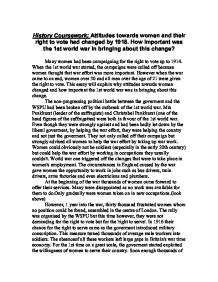 Attitudes towards women and their right to vote had changed by 1918. How important was the 1st world war in bringing about this change?

They not only called off their campaign but strongly advised all women to help the war effort by taking up war work. Women could obviously not be soldiers (especially in the early 20th century) but could help the war effort by working in occupations they usually couldn't. World war one triggered off the changes that were to take place in women's employment. The circumstances in England caused by the war gave women the oppurtunity to work in jobs such as bus drivers, train drivers, arms factories and even electricians and plumbers. ...read more.

The rally was organised by the WSPU but this time however, they were not demanding for the right to vote but for the 'right to serve'. In 1916 their chance for the right to serve came as the goverment introduced military conscription. This measure turned thousands of average male workers into soldiers. The absenceof all these workers left large gaps in Britain's war time economy. For the 1st time on a great scale, the goverment started exploited the willingness of women to serve their country. Soon enough thousands of women were employed to fill the jobs left empty by the soldiers on their way to the battlefields. This caused a dramatic increase in the numbers of women employed in nearly every occupation. Women being employed ...read more.