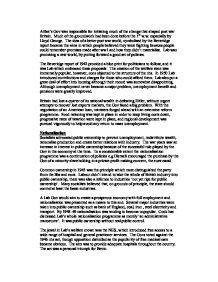 Attlee's Gov was responsible for initiating much of the change that shaped post war Britain.

Attlee's Gov was responsible for initiating much of the change that shaped post war Britain. Much of the groundwork had been done before the 1st w.w. especially by Lloyd George. The idea of a better post war world, symbolised by the Beveridge report became the aims in which people believed they were fighting because people could remember promises made after ww1 and how they didn't materialise. Lab was promising a new world, by putting forward a good set of policies. The Beveridge report of 1942 provided a blue print for politicians to follow, and it was Lab which embraced these proposals. The creation of the welfare state was immensely popular, however, cons objected to the structure of the nhs. In 1950 Lab introduced contributions and charges for those who could afford them. Lab also put a great deal of effort into housing although their record was somewhat disappointing. Although unemployment never became a major problem, unemployment benefit and pensions were greatly improved. Britain had lost a quarter of its national wealth in defeating Hitler, without urgent attempts to recover lost exports markets, the Gov faced a big problem. With the negotiation of an American loan, ministers forged ahead with an extensive reform programme. Food rationing was kept in place in order to keep living costs down, progressive rates of taxation were kept in place, and regional development was pursued vigorously to help avoid any return to mass unemployment. ...read more.

Marshall aid started just after the u.s loan had been used up, Brit had suffered from American inflation, prices rose as consumers attempted to buy goods in short supply. Brit had agreed when it negotiated the original loan to make sterling convertible within 1 yr of the loan agreement. It did so in 1947 which led to a run on the pound forcing suspension of convertibility. Considerable damage was done to the economy and balance of payments. This further included cuts in the food rationing. With the help of marshall aid, Brit enjoyed a boom in 1948, yet by summer of 1949 Brit was into its 2nd crisis since the war. This was partly due to the American recession, which meant fewer opportunities for Brit. It led to devaluation of the pound and it was a body blow to brit self-esteem. Despite the difficulties , sufficient progress had been made in Brit for Gaitskell to agree to suspension of Marshall aid by 1951. Correlli Barnett has attacked Lab for introducing too much rather than too little socialism. The foolishness of giving priority to welfare reform over economic regeneration was compounded by Attlee after1945, with the result Britain missed a unique chance to remake itself industrially. ...read more.

In the adverse economic situation after the war, when it was necessary to borrow massive amounts of money merely to stave off bankruptcy, any Gov was likely to become unpopular. A determination that promises of improved social provision must this time be honoured and never again abandoned as they had been by successive Con dominatred Govs after the 1st w w. Labour was elected precisely of its commitment to measures that British people felt had too long been denied. However, the Gov could claim credit for its part in the nations post-war economic recovery, over the next 6yrs Attlee's cabinet provided the circumstances necessary for sustained economic growth. There was a 3 fold increase in export volume, industrial output grew by a third. With the assistance of the American loan and marshall aid, the balance of payment showed current account surpluses. Economic recovery was the essential foundation of Lab's welfare programme, it offered fresh hope and opportunity. For the young secondary education became a right for the 1st time and Bevan's house programme meant that affordable, decent accommodation was, as never before within the reach of thousands of lower- income families. Voters were now given a choice between a Lab party which, to its socialists critics, was tending towards conservatism and a Con party which, to its right wing, had under Butler's influence committed itself to socialist policies. ...read more.