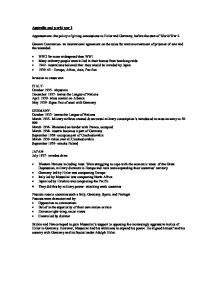 Australia and world war 2 Appeasement- the policy of giving concessions to Hitler and Germany, before the start of World War 2. Geneva Convention- an international agreement on the rules for wartime treatment of prisoner-of-war and the wounded. * WW2 far more widespread than WW1 * Many ordinary people were killed in their homes from bombing raids * 1942- Australians believed that they would be invaded by Japan * 1939-45 - Europe, Africa, Asia, Pacifica Invasion to cause war- ITALY- October 1935- Abyssinia December 1937- leaves the League of Nations April 1939- takes control on Albania May 1939- Signs Pact of steel with Germany GERMANY- October 1933- leaves the League of Nations March 1935- Military airforce created & universal military conscription's introduced to raise an army to 50 000 March 1936- Rhineland on border with France, occupied March 1938- Austria becomes a part of Germany September 1938- occupies part of Czechoslovakia March 1939- takes over all Czechoslovakia September 1939- attacks Poland JAPAN- July 1937- invades china * Western Nations including Aust. Were struggling to cope with the economic woes of the Great Depression, military dictators in Europe and Asia were expanding their countries' territory. * Germany led by Hitler was conquering Europe * Italy led by Mussolini was conquering North Africa * Japan led by Hirohito was conquering the Pacific * They did this by military power- attacking weak countries Fascism rose in ...read more.

with hot oil- many burnt to death * 332 ppl on board, 299 ppl died including 11 nurses and 18 doctors * Sister Eleanor- helped all wounded even though she was in her own pain * It caused outrage in Australia and made people even more determined to defeat Japan Darwin Attacked * Japanese bombing raid on Darwin * Ships and airfield at Darwin were the Japanese targets- they need to destroy theses so they could invade PNG and then Australia * February 1942- in the 1st enemy attack on Australian soil- Darwin was bombed by 93 Japanese planes * At midday on the same day- 54 bombers attacked Darwin's RAAF base * In both raids- 243 people were killed and hundreds were injured- most were civilians * To avoid panic among the Australian people the government stated that only 15 people had been killed and 24 wounded * Over the next two years, Darwin was attacked at least 58 times Attack on Sydney * Early on Saturday 30 May 1942- a Japanese seaplane flew down Sydney Harbour past the bridge and back out to its mother submarine * No-one fired at it, it was able to note where the important warships were * On Sunday night- 3 Japanese midget submarines had two crew members and a torpedo, they entered Sydney Harbor * One of the sub's was caught in to boom net * ...read more.

was in short supply- in 1944 meat ration 1 or 2 kg per person per week * Petrol also rationed Precautions * Beaches were spread with barbed wire, apart from a path to the water that was locked at night, guard patrolled beaches * Windows in town n cities had to be blacked * Streets light were reduced in Sydney only every second light bulb was lit * Street signs, railway signs were taken to confuse the enemy * Every building with more than 130 people working in it had to have an air- raid shelter Milne bay * While the Australians were trying to stop the Japanese crossing the Owen Stanley range. Japanese decided to capture the newly built allied air fields at Milne Bay in PNG * IF the Japanese was able to capture Milne Bay they would be able to use it as a base for their ships and air craft and attack Port Moresby from two sides on August 25th 1942 * Australians soliders were untrained and many had never fought before * They were however helped by RAAF planes which destroyed several Japanese landing barges * After many days of fighting in the mud an rain, Australia finally defeated the Japanese airfields and forced the Japanese to retreat- September 1942 * 1st defeat for Japanese on land * Gr8 morale boost for troops and people back at home * ...read more.