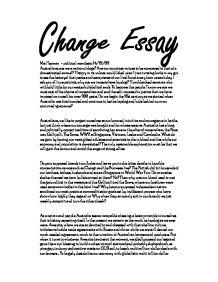 Australians, are we a nation of dogs? Are our countries virtues to be compared to that of a domesticated animal?

Mrs Herman - political manifesto 14/12/02 Australians, are we a nation of dogs? Are our countries virtues to be compared to that of a domesticated animal? History in its unbias would label us so. It is a twisting knife in my gut to see the betrayal that pecks and tears pieces of our livelihood away from us each day. I ask you all true patriots, why are we imperialisms lapdog? Hunchbacked servants who withhold little for our master's diabolical ends. To become the people I know we are we must cast of the chains of imperialism and end the self-imposed in justice that we have imposed on ourself for over 200 years. Do we begin the 21st century as we started when Australia was first founded and continue to be the lapdog and hide behind our own contrived ignorance? Australians, we like to project ourselves as sun bronzed, intuitive and courageous in battle, but just think where our courage was bought and for whose reasons. Australia has a long and politically correct tradition of sacrificing her sons on the alter of imperialism, the Bore war, Gallipolli, The Some, WW2 at Singapore, Vietnam, Laska and Cambodia. ...read more.

Maybe the only politician we have ever know with intestinal fortitude, Gough Whitlam, was sacked and disgraced when he tried to stop the cycle of Australia selling itself to the world. He was overthrown by MI6 and the CIA. A democratically elected leader was kicked out of office at the hands of a foreign power; it is needless to say that this wasn't in OUR best interests. And we did nothing. Our history is not a proud or monumental one it is a deeply sad one filled with each generation slitting theirs wrists and their children's at the behest of higher powers. A betrayal most foul in the words of Shakespeare. Much like the Vikings of earlier days we have been despoiled, murdered and raped by the blonde haired, blue-eyed powers of the world. All the while we have been self attuned (doublethink anyone?) to stand back and focus on the insignificant such as MTV awards, OSCARS, Hip Hop, manufactured angry white trash such as Eminem to deliberately avoid seeing the big picture. Why? Why in spite of all that history has taught us and the evidence under our eyes and in our graveyards do we still doggedly cling to their corrupt nature with zeal? ...read more.

To become what we want to be involves changing from what we are. This means refusing to send our sons, brothers, fathers, husbands and women off to war in Iraq, another self-serving war for the Americans that has nothing to do with us except to confirm our position as Americas gimp. Will we stand by and continue to commit an unforgivable slandering of our ONLY true friends - the kiwis - because they have the guts to tell America what they can do with their nuclear subs and their double standards war. It is easy to direct ones anger at a lone politician. It is easy to say "what a fool". It is easy to forget or conveniently ignore completely my plea. It is hard but infinitely more valuable to be able to wilfully step out of ones comfort zone and to say "My voice will be heard, I will no longer be vultured upon and I WILL NOT allow anything to despoil my children's future like a thief in the night". I urge........ I implore all Australians to not let the past repeat itself and to change if only in a small way to become the nation we are, if hidden by all the layers of submission and cowardice we hide ourselves in. No war in Iraq, the US has all the oil its needs anyway. ...read more.