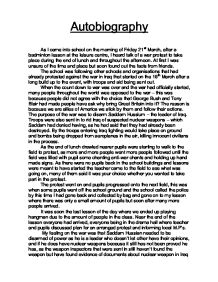 Autobiography - As I came into school on the morning of Friday 21st March, after a badminton lesson at the leisure centre, I heard talk of a war protest to take place during the end of lunch and throughout the afternoon

Autobiography As I came into school on the morning of Friday 21st March, after a badminton lesson at the leisure centre, I heard talk of a war protest to take place during the end of lunch and throughout the afternoon. At first I was unsure of the time and place but soon found out the facts from friends. The school was following other schools and organisations that had already protested against the war in Iraq that started on the 19th March after a long build up to the event, with troops and aid being sent out. When the count down to war was over and the war had officially started, many people throughout the world wee opposed to the war - this was because people did not agree with the choice that George Bush and Tony Blair had made people have ask why bring Great Britain into it? ...read more.

By the troops entering Iraq fighting would take place on ground and bombs being dropped from aeroplanes in the air, killing innocent civilians in the process. As the end of lunch drawled nearer pupils were starting to walk to the field to protest, as more and more people went more people followed until the field was filled with pupil some chanting anti-war chants and holding up hand made signs. As there were no pupils back in the school buildings and lessons were meant to have started the teacher came to the field to see what was going on, many of them said it was your choice whether you wanted to take part in the protest. ...read more.

My feeling on the war was that Saddam Hussian needed to be disarmed of power as he is a leader who doesn't let other have their opinions, and if he does have nuclear weapons because it still has not been proved he has, as the weapon inspectors that were sent in still haven't found the weapon but have found evidence of documents about nuclear weapon in Iraq but I didn't want a war as innocent people like you and I have been killed, injured or scared. War was the only option they could have agreed on to destroy such a powerful leader. At the end of and eventful afternoon it was the weekend of the mop and people were off home to enjoy their weekend. ...read more.