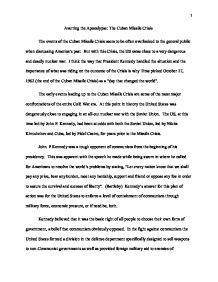 Averting the Apocalypse: The Cuban Missile Crisis The events of the Cuban Missile Crisis seem to be often overlooked to the general public when discussing America's past. But with this Crisis, the US came close to a very dangerous and deadly nuclear war. I think the way that President Kennedy handled the situation and the importance of what was riding on the outcome of the Crisis is why Time picked October 27, 1962 (the end of the Cuban Missile Crisis) as a "day that changed the world". The early events leading up to the Cuban Missile Crisis are some of the most major confrontations of the entire Cold War era. At this point in history the United States was dangerously close to engaging in an all-out nuclear war with the Soviet Union. The US, at this time led by John F. Kennedy, had been at odds with both the Soviet Union, led by Nikita Khrushchev and Cuba, led by Fidel Castro, for years prior to the Missile Crisis. John. F Kennedy was a tough opponent of communism from the beginning of his presidency. This was apparent with the speech he made while being sworn in where he called for Americans to resolve the world's problems by stating, "Let every nation know that ...read more.

Due to the failing of the US invasion, Castro spread propaganda against the "weakening" United States and promised to spread Communism through Latin America. Castro was convinced that the Bay of Pigs invasion would not be the only attempt from the United States to invade his country. With this assumption Castro wanted a way to protect Cuba from foreign attack. At the same time Khrushchev was considering the placement of intermediate-range missiles in Cuba in order to double the Soviet strategic arsenal and to also provide a deterrent to a US intervention to either country. (Thinkquest) In 1962 the USSR had begun building missile installations in Cuba. Aside from protecting Soviet interests in Cuba, Khrushchev felt that he could set out a form of equality in the nuclear power of the Soviet Union compared with the United States if he had weapons in the Western hemisphere. He also made it a point to let the Americans know "your rockets are in Turkey. You are worried by Cuba...because it is 90 miles from the American coast. But Turkey is next to us". (Spielvogel) In July of 1962 America picked up on a large number of Soviets ships in the waters surrounding Cuba. ...read more.

The Soviet Union tried to compete and wanted to spread its idea of Communism to the world and become greater in power than the United States and its allies. The Soviets even went as far as deceiving the public and the media during events such as parades where they would continuously circle their troops and tanks around, making it appear as if they had more than they actually did. But ultimately, Khrushchev knew that America had more prestige and power, especially in terms of military force over the Soviet Union and backed down from an all-out war in order to ensure his countries survival. It is easy to see why Time picked the day of and events leading up to October 27, 1962 as a day that changed the world. It is hard to say how life would be different today if the crisis was not avoided, but it is safe to say that things would be very different. If the events leading up to that fateful day were handled differently, the world we live in would be a very different place. Hopefully there will never again be such an event that so closely threatens the security and safety of the United States. ...read more.