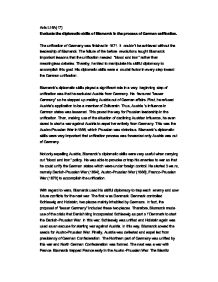 Avis Li 6A(17) Evaluate the diplomatic skills of Bismarck in the process of German unification. The unification of Germany was finished in 1871. It couldn't be achieved without the leadership of Bismarck. The failure of the before revolutions taught Bismarck important lessons that the unification needed "blood and iron" rather than meaningless debates. Thereby, he tried to manipulate his skilful diplomacy to accomplish this goal. His diplomatic skills were a crucial factor in every step toward the German unification. Bismarck's diplomatic skills played a significant role in a very beginning step of unification was that he excluded Austria from Germany. He favoured "lesser Germany" so he stepped up making Austria out of German affairs. First, he refused Austria's application to be a member of Zollverein. Thus, Austria's influence in German states was lessened. This paved the way for Prussian leadership in the unification. ...read more.

Therefore, Bismarck made use of the crisis that Danish king incorporated Schleswig as part of Denmark to start the Danish-Prussian War. In this war, Schleswig was unified and Holstein again was used as an excuse for starting war against Austria. In this way, Bismarck sowed the seeds for Austro-Prussian War. Finally, Austria was defeated and expelled from presidency of German Confederation. The Northern part of Germany was unified by this war and North German Confederation was formed. The next was a war with France. Bismarck trapped France early in the Austro-Prussian War. The Biarritz meeting, which secured French neutrality in the war, promised Rhineland to France. No written agreement was reached and this provided grounds for future war against France to achieve the unification. Apart from trapping enemies, Bismarck was an opportunist. He was able to make use of every crisis to start war against enemies. ...read more.

Later, he also obtained the neutrality from Russia and France for the war with Austria. The promise of ceding Rhineland for sure made France not to interfere into the war against Austria. Bismarck knew when to keep friendship and when to let it lapse. By treating Austria leniently in the Treaty of Prague, Bismarck for sure won the future friendship of Austria and prevented possible revenge of Austria. He let the French friendship end, as it was necessary to start war with France to finish the unification. He also won the support of Southern German states by revealing the French ambition. Thereby, he could complete the unification of Germany. To sum up, Bismarck was a very skilful diplomat that he could exclude Austria, start war, set traps for future war and isolate enemies. He also made use of every opportunity to start disputes with foreign countries in order to accomplish the goal of unifying Germany. By his skilful diplomacy and the 3 wars he provoked, the unification was completed and the new German Empire was born in 1871. ...read more.