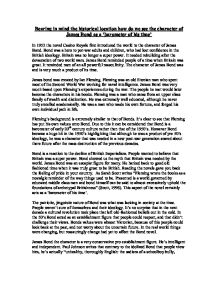 Bearing in mind the historical location how do we see the character of James Bond as a 'barometer of his time' In 1952 the novel Casino Royale first introduced the world to the character of James Bond. Bond was a hero to pot-war adults and children, who had lost confidence in the British ideology. Britain was no longer a super power. It needed rebuilding after the devastation of two world wars. James Bond reminded people of a time when Britain was great. It reminded men of an all powerful masculinity. The character of James Bond was and is very much a product of its time. James bond was created by Ian Fleming. Fleming was an old Etonian man who spent most of the Second World War working for naval intelligence. James Bond was very much based upon Fleming's experiences during the war. The people he met would later become the characters in his books. Fleming was a man who came from an upper class family of wealth and distinction. He was extremely well educated, although he never truly excelled academically. He was a man who made his own fortune, and forged his own individual path in life. ...read more.

Rather then being backward looking in terms of consumerism Bond was right at the fore front. Bond with his designer clothes and his penchant for labels is a real marker for how 50's consumer society wanted to be. Coupled with consumerism, James Bonds need for sex is a part of Bond that is very much of future generations. Bond was "Concerned purely with his own sexual appetite"(Horrocks 1995) Changing opinions meant society was breaking free from "Victorianism...which had acted as a straightjacket or safety-valve for the past century"( Chapman 1999) At the same time as Bond came the first serialization of a pornographic magazine, Playboy. Along with Playboy magazine, the Bond series was one of the main sources of the 50's and 60's male fantasy of the good life with swinging sex. Bond could be considered as paving the way for the 60's ideals of free love. In the 1950's, as David Carradine writes "At home, a changing conventional morality was accompanied by an unprecedented rise in living standards, which encouraged the most puritanical critics of 'decline' to liken England to the roman empire - obsessed with sex and self indulgence, and turning its back on the more Spartan modes of life which had been the foundation of former greatness"(Cannadine, (1979) ...read more.

2002's Bond is more understanding of others, he's lonely selfish existence has changed. Race and feminism are no longer by words for being weaker. In conclusion James Bond seems to represent pre 1950's beliefs. Bond is "Sexist, heterosexist, jingoistic, xenophobic and racist" (Chapman 1999 pg 13) He seems to be of an older generation. Together with those ideologies is Bond's very post 60's views of consumerism and sex. 1950's Bond was a reassuring figure to those that remember the good old days, and also an inspiration to the younger generation who wanted what they want, not what their parents had told them too. We see the character of James Bond as a 'barometer of his time', because of firstly the fact that he was so popular in the late 1950's onwards, means that society found something in the character they could relate too. Society relates to a character because it has something they desire to be. James Bond had lots of elements that people aspire to have. For this reason Bond shows us how the society of its time felt and what they want to believe. James Bond gives us a fantastic insight into the morals and ideologies of the historical location it came from. . ...read more.