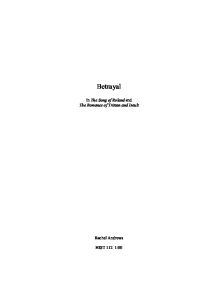 Betrayal In The Song of Roland and The Romance of Tristan and Iseult.

Betrayal In The Song of Roland and The Romance of Tristan and Iseult Rachel Andrews HIST 112 1:00 The concepts of "love" and "duty" changed in Europe during the medieval era. Literary works such as The Song of Roland and The Romance of Tristan and Iseult reflect that change by revealing to us how 'Love' and 'Betrayal' fit into society during the times they were written. Roland reflects the importance of loyalty to one's lord and the sacrifice of self for the good of the Lord and his kingdom. The Romance marks a shift in the priorities of duty, romanticized an individual's need to fulfill their own desires, and created a circumstance for which betrayal of one's lord could be justified. In early and mid medieval Europe, the concept of one's "country" was still vaguely defined. A vassal was loyal only to their lord, a distinct concept in Roland, where treason was a personal betrayal of one's lord, a political betrayal of one's kingdom, and a societal betrayal of a system which had sustained the needs of the upper class for centuries. The Christian characters in Roland are people defined by their vassalage to their lord, King Charles. Their every thought and action is in service to Charles, and indirectly to God. Close to death, main characters such as Archbishop Turpin profess their sorrow for failing to defend the king's divine principles and losing their place as his servants: "My own death causes me great pain, for I shall see the mighty emperor no more" (Roland 118). ...read more.

As a story heard far and wide by the vassals of the time, it stressed even more in their minds the importance of their oaths to serve their lords. Literature in the twelfth century began to introduce the concept of romantic love, however the idea of it occurring between a husband and wife was rarely utilized in stories. Marriage and love became separate entities; Marriage was an institution of duty, restriction, and convention. Love, in contradiction to Marriage, is idealized as chivalric, adventurous, and unfortunately for most lovers, very dangerous. In The Romance of Tristan and Iseult, romantic love occurs not between Iseult and her betrothed husband King Mark, but with his most trusted vassal, Tristan. As in Roland, betrayal in this story is also connected to personal relationships, political bonds, and societal expectations. After Tristan served King Mark for three years, "a mutual love grew up in their hearts"(Roland 10). Their love was of affinity and loyalty, and it evolved and strengthened when they realized they were kin. The fact that his own nephew was in love with his wife was a personal blow; a misuse of trust that had been built over many years of friendship and service. The marriage between King Mark and Iseult was partly an attempt to reconcile their respective kingdoms of Cornwall and Ireland. ...read more.

He is almost acquitted by the jury, and only through a trial by combat is he proved to be unfavored by god, and therefore guilty. Charles was able to withhold his anger and desire for vengeance in order to fulfill his obligation as a lord. Mark was so hurt by Tristan's actions that he refused a trial and insisted he be executed immediately. Tristan was lucky enough to get away, and after many attempts by Mark to keep them apart, it seemed Tristan and Iseult had some sort of divine favour. The people of the kingdom and Tristan's loyal friends adored the couple and believed their union was meant to be. Mark eventually acknowledged the legitimacy of their love and realized after their deaths that he had lost his closest friend and his wife. The two worlds of The Song and Roland and The Romance of Tristan and Iseult parallel the reality of the medieval era. Both emphasize the system of lordship which had then sustained the hierarchies of society. But even the most powerful lords are not immune to betrayal. The betrayal of Roland exemplifies the political importance of the oaths made between lords and vassals. The betrayal of King Mark illustrates the changing concept of love and a shift of priority to the individual. However, these sorts of betrayal were rare in the real world - the adventure, risk, and danger were more suitable for fictional characters who had nothing real to lose. ...read more.