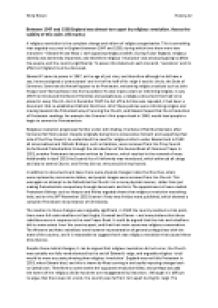 Between 1547 and 1558 England was almost torn apart by religious revolution. Assess the validity of this claim. (45 marks)

﻿Emily Brown History A2 Between 1547 and 1558 England was almost torn apart by religious revolution. Assess the validity of this claim. (45 marks) A religious revolution is the complete change and reform of religious organisation. This is something that arguably occurred in England between 1547 and 1558, during which time there were two monarchs ? Edward VI and Mary I, with opposing religious beliefs. During Tudor England, religious identity was extremely important, and therefore religious ?revolution? was obviously going to affect the people, and the country significantly. To assess this statement each monarch, ?revolution? and its affect on England must be discussed. Edward VI came to power in 1547, at the age of just nine, and therefore although he did have a say, he was assigned a ?protectorate? and in the first half of his reign it was his Uncle, the Duke of Somerset. Somerset did himself appear to be Protestant, welcoming religious radicals such as John Hooper and Thomas Becon into his household. He also made a start on reforming religion; in July 1547 he introduced the Book of Homilies and paraphrases, a religious document that had to be placed in every Church. ...read more.

Although it is difficult to argue that there was not unrest, the country was far from torn apart during his reign. The rebellions were not a particular threat to Edward himself, and it could be suggested that Somerset?s incompetency and failure to act was the only reason that they lasted as long as they did, and that after 1549, Northumberland kept the country relatively stable. Alternatively, religious revolution may not be the primary cause of rebellion at the time. Many people were far more unhappy about Enclosure policies and taxation, for example the Sheep Tax that was introduced in 1549. Reasons for the rebellions may have been far from discontent at religious policies, the Devon Articles drawn up by the Western rebels were on religious and economic issues. Arguably factors such as the hatred of local government officials, and distrust between peasants and landowners, were far more important. The historian Duffy believes in the importance of ?class antagonism? when thinking about the cause of the rebellions, showing perhaps that actually religious reform had less of an impact than we have come to believe. ...read more.

However it is impossible to come to the conclusion that it tore the country apart, as generally life was never so disrupted that it stopped. What is clear though is that at the end of both reigns the country was neither one religion nor the other, due to a number of reasons, perhaps the most prominent being both monarchs lack of time to enforce one religion or the other. When Elizabeth came to the throne and successfully restored Protestantism, she had a lot more time, and had been handed what was following all of these different reforms, a more religiously neutral country. Whilst to an extent there was religious revolution, the revolution was coming from above, never below, and with very few exceptions, the people were most definitely not revolutionised. It could be argued that there was more revolution under Edward than Mary, due to the stable nature of the country during Mary?s reign, however the discontent under Edward was more due to social and economic factors than religious ones. In conclusion, religious ?crisis? and ?disruption? are more accurate terms to describe the changes and the resulting state of the country between 1547 and 1558, than religious ?revolution? and ?torn apart? are. ...read more.