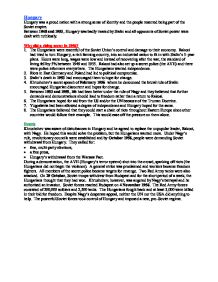 Between 1948 and 1953, Hungary was badly treated by Stalin and all opponents of Soviet power were dealt with ruthlessly.

Hungary Hungary was a proud nation with a strong sense of identity and the people resented being part of the Soviet empire. Between 1948 and 1953, Hungary was badly treated by Stalin and all opponents of Soviet power were dealt with ruthlessly. Why did a rising occur in 1956? 1. The Hungarians were resentful of the Soviet Union's control and damage to their economy. Rakosi had tried to turn Hungary, a rich farming country, into an industrial nation to fit in with Stalin's 5-year plans. Hours were long, wages were low and instead of recovering after the war, the standard of living fell by 5% between 1949 and 1955. Rakosi had also set up a secret police (the AVH) and there were police informers everywhere. The Hungarians wanted independence. 2. Riots in East Germany and Poland had led to political compromise. 3. Stalin's death in 1953 had encouraged them to hope for change. ...read more.

Khrushchev, however, was angered by Nagy's betrayal and he authorised an invasion. Soviet forces reached Budapest on 4 November 1956. The Red Army forces consisted of 200,000 soldiers and 2,500 tanks. The Hungarians fought back and at least 3,000 were killed in their bid for freedom. Despite Nagy's desperate appeal, neither the UN nor the USA did anything to help. The powerful Soviet forces took control of Hungary and imposed a new, pro-Soviet regime. Why did Khrushchev authorise the invasion of Hungary? We can split this into the message he was trying to send out to Hungary, Eastern Europe, the rest of the World and Russia. HUNGARY 1. He was proving to the Hungarians that their demands were too great and that they would be crushed if they attempted to remove Soviet control. 2. He was not prepared to allow the break-up of the Warsaw Pact. 3. He had compromised and given the Hungarians Nagy, but they were not grateful and instead made further demands. ...read more.

Why did the rising fail? 1. Hungarians were inexperienced and poorly equipped. 2. Soviet Union had many more trained soldiers and they had tanks. 3. Red Army were ruthless and used terror to regain control. 4. No aid from the US or UN. 5. Other Eastern European states did not become involved or create similar uprising as expected, which would have eased the pressure on Hungary. 6. Khrushchev reacted swiftly and harshly, which led to defeat. Consequences 1. A pro-Soviet government was established in Hungary, but it was better than Rakosi's government since economic conditions gradually improved. 2. Supporters of the rising were punished and Nagy was executed in 1958. 3. The people of Eastern Europe realised that there was no means of escape from soviet control. 4. The Soviet Union confirmed its control of Eastern Europe and military strength to the rest of the world. 5. The world was shocked by Soviet brutality. 6. The US and UN were regarded as weak because they did not confront the USSR. However, the Russians were reassured that the Americans respected their sphere of influence. ...read more.