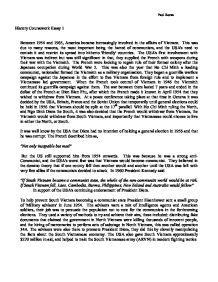 Between 1954 and 1965, America became increasingly involved in the affairs of Vietnam.

History Coursework Essay 1 Between 1954 and 1965, America became increasingly involved in the affairs of Vietnam. This was due to many reasons, the most important being the hatred of communism, and the USA's need to contain it and restrict its spread into hitherto 'friendly' countries. The USA's first involvement with Vietnam was indirect but was still significant in that, they supplied the French with weapons during their war with the Vietminh. The French were looking to regain rule of their former colony after the Japanese occupation during World War 2. This was also the year that Ho Chi Minh a leading communist, nationalist formed the Vietminh as a military organisation. They began a guerrilla warfare campaign against the Japanese in the effort to free Vietnam from foreign rule and to implement a Vietnamese led government. When the French took control of Vietnam in 1946 the Vietminh continued its guerrilla campaign against them. The war between them lasted 7 years and ended in the defeat of the French at Dien Bien Phu, after which the French made it known in April 1954 that they wished to withdraw from Vietnam. At a peace conference taking place at that time in Geneva it was decided by the USA, Britain, France and the Soviet Union that temporarily until general elections could be held in 1956 that Vietnam should be split at the 17th parallel. ...read more.

Another major reason why Diem was unpopular and why the US felt he was no longer a proficient leader, was the continuing success of the NLF. The NLF or National Liberation Front was another armed resistance force directed against President Diem, and it was given aid by Ho Chi Minh and North Vietnam. The NLF's aim was the replacement of the Diem administration, with a government that "represented all social classes and religions". The NLF used the tactic of getting the poor South Vietnamese peasants on their side, they achieved this by taking land from the rich and giving it to the poor peasants. It proved to be extremely successful tactic as the peasants hated working for the landowners. The NLF also kept operatives in many villages to reassure the villagers, and to stop Diems forces 'liberating' the village. America's new president, President Kennedy, was concerned about the events in South Vietnam so he sent 100 more 'advisors', and gave South Vietnam the money to increase its army by an extra 20,000. In 1962 a new counter-tactic was commenced to try and stop the NLF gaining more support in the rural villages. It involved the moving of the peasants into new villages under the army's control, heavy defences were built around the villages, and guards protected them, it was called the 'strategic hamlet' programme. ...read more.

It was scheduled to last for 8 weeks, but it lasted for 3 years, 1 million bombs were dropped. The NLF's answer to this was to concentrate its attacks on the US air bases in South Vietnam. This presented a problem to the US, as the General in charge of US 'advisors' in Vietnam, General Westmoreland, had concluded that the 23,000 men there could not adequately defend the bases. Johnson took the only route he could, and on 8th March sent 3,500 US marines to South Vietnam. In conclusion, the USA's increasing involvement Vietnam was due to fear, hatred and the attempt to contain communism. At first America were indirectly part of the war, they gave financial aid and equipment to the South Vietnamese. They increasingly became involved when the prospect of communism endangered their 'backyard'. The USA was dragged into a war by their complete and utter hatred of communism. The US thought the war was communism against nationalist, whereas in fact it was between colonialists and Nationalists. The later part of the war consisted of two Nationalist parties who both wanted power over Vietnam. America's tunnel vision saw the Vietminh led by a communist. This meant America would do anything they could to defeat the Vietminh and the NLF, and that aim dragged them feet first into a war they fought for the wrong reasons. Paul Bevan ...read more.