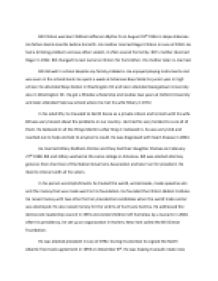 ﻿Bill Clinton was born William Jefferson Blythe IV on August 19th 1946 in Hope Arkansas. His father died 6 months before his birth. His mother married Roger Clinton in June of 1950. He had a drinking problem and was often violent, it often scared his family. Bill?s mother divorced Roger in 1962. Bill changed his last name to Clinton for his brother. His mother later re-married. Bill did well in school despite any family problems. He enjoyed playing instruments and was even in the school band. He spent a week at Arkansas Boys State his junior year in high school. He attended Boys Nation in Washington DC and later attended Georgetown University also in Washington DC. He got a Rhodes scholarship and studies two years at Oxford University and later attended Yale law school where he met his wife Hillary in 1972. ...read more.

He founded the Clinton Global Institute. He raised money with two other former presidential candidates when the world trade center was destroyed. He also raised money for the victims of hurricane Katrina. He addressed the democratic leadership council in 1991 and visited children left homeless by a tsunami in 2004. After his presidency, he set up an organization in Harlem, New York called the Bill Clinton Foundation. He was elected president in July of 1992. During his election he signed the North Atlantic free tracle agreement in 1993 on December 8th. He was hoping it would create new jobs in the US. It ended up creating new jobs and lowering taxes for less financially able people. He signed a law that would put more police officers on the street, he started Ameri-Cops. ...read more.

He fought against it. Less than two months later, the Senate found Bill not guilty and he could finish the rest of his term. He apologized to the American people for what he had done. He continued to do what he could to bring peace to the world. I like how he enjoyed helping people and doing what he could to make sure his country was good and running properly and that he did everything he could in his power to fix any problems. I don?t have any problems with this president. I?ve always loved Bill Clinton. Personally, Bill was kind, generous, good looking, loving and honest even when he made mistakes. If Bill were to run for president again, I would defiantly vote for him. He was a good president in everything he did even when he failed because he made sure he fixed it. He continues to be a good humanitarian out of office as well and I respect him for that. ...read more.