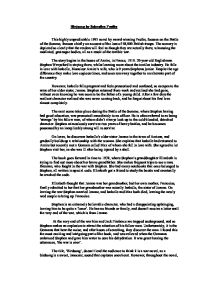 Birdsong by Sebastian Faulks This highly unpredictable 1993 novel by award-winning Faulks, focuses on the Battle of the Somme, famous chiefly on account of the loss of 58,000 British troops. The scenery is depicted so clearly that the readers will feel as though they are actually there, witnessing the mutilated, grotesque bodies, all as a result of the terrible war. The story begins in the house of Azaire, in France, 1910. 20-year-old Englishman Stephen Wraysford is staying there, whilst learning more about the textiles industry. He falls in love with Isabelle, Monsieur Azaire's wife, who is 9 years Stephens junior. Despite the age difference they make love copious times, and soon run away together to an alternate part of the country. However, Isabelle falls pregnant and feels pressurised and confused, so escapes to the arms of her elder sister, Jeanne. ...read more.

She agreed to let Stephen visit her, as she was ill after being injured by a shell. The book goes forward in time to 1978, where Stephen's granddaughter Elizabeth is trying to find out more about her brave grandfather. She makes frequent trips to see a man, Brennan, who fought in the war with Stephen. She had many notebooks that once belonged to Stephen, all written in special code. Elizabeth got a friend to study the books and eventually he cracked the code. Elizabeth thought that Jeanne was her grandmother, but her own mother, Francoise, finally admitted to her that her grandmother was actually Isabelle, the sister of Jeanne. On leaving the war Stephen married Jeanne, and Isabelle and Max both died, leaving the newly wed couple to bring up Francoise. ...read more.

After making love to Isabelle for the first time, he lies in complete satisfaction listening to the birds. Also, at the end of the war, he returns above ground with some new German friends, to be greeted by the sweet tune of birds. When writing this I believe that Faulks' intentions were to inform people of what is was like to be a soldier in the Battle of the Somme, and he successfully did so by producing a very accurate account of what it was like. I felt fully the exhaustion and hysteria that the soldiers must have felt and it made me appreciate to some extent just what they went through. This entertaining yet informing book is a classic that I will never forget, although perhaps a bit too long. This gripping, moving revelatory book intrigued me and I particularly recommend it to those that found history lessons tedious, but want to know more about the Battle of the Somme. ...read more.