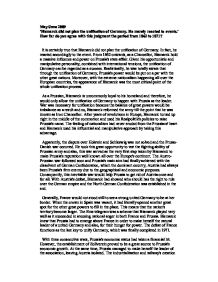 Bismarck did not plan the unification of Germany. He merely reacted to events.

Apparently, the dispute over Holstein and Schleswig was not solved and the Prusso-Danish war occurred. He took this great opportunity to test the fighting ability of Prussian army and also, this war served as the very first step taken by Bismarck to make Prussia's reputation well known all over the Europe's continent. The Austro-Prussian war followed soon and Prussia's main aim had finally achieved with the dissolvent of German Confederation, which the dominant country, Austria had always been Prussia's firm enemy due to the geographical and economic purposes. Consequently, this inevitable war would help Prussia to get rid of Austria once and for all. With Austria's defeat, Bismarck had showed who should has the right to rule over the German empire and the North German Confederation was established in the end. ...read more.

With three consecutive wars, Prussia's economic status had taken a financial hit. However, the establishment of Zollverein proved to be a great source to Prussia's economic growth. At the same time, Prussia managed to make herself the leader of the association, leaving Austria isolated. The industrialization and railway's creation contribute a lot to make her to become the leading country of a united Germany. Bismarck transformed Prussia's economy to a centralized economy, which would decrease the nation's investment on military. In conclusion, the unification would not happen if the international tensions didn't appeared but the emergence of Bismarck had strengthened the German's union. Needless to say, without the nationalist elements within the Germans, similar cultures as well as economic growth, Bismarck may not have succeeded in unifying Germany. In other words, the unification of Germany proves that Bismarck united the German empire accordingly to events. ...read more.