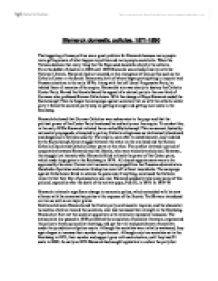 Bismarck domestic policies, 1871-1890 The beggaring of mass politics was a great problem for Bismarck because more people were getting aware of what happen in politics and more people could vote. When the Vatican declares that every thing that the Pope sead should be obey by the catholic. From the defeat of Austria in 1866 until 1878 Bismarck was allied primarily with the National Liberals. Bismarck had not counted on the emergence of new parties such as the Catholic Center or the Social Democrats, both of whom began participating in imperial and Prussian elections in the early 1870s. Along with the left liberal Progressive Party, he labeled them all enemies of the empire. Bismarck's aim was clearly to destroy the Catholic Center Party. He and the liberals feared the appeal of a clerical party to the one-third of Germans who professed Roman Catholicism. With the change of Pope Bismarck ended the Kulturkampf. Then he began the campaign against socialism that as with the catholic center party it failed the socialist party keep on getting stronger and getting more seats in the Reichstag. ...read more.

In 1878-79 Bismarck initiated a significant change in economic policy, which coincided with his new alliance with the conservative parties at the expense of the liberals. Tariffs were introduced on iron as well as on major grains. Relations between Bismarck and the Center party continued to improve, and the chancellor turned his attention toward the socialists, who had increased their strength in the Reichstag. Bismarck at first met the socialist opposition with extremely repressive measures. The antisocialist law passed in 1878 prohibited the circulation of socialist literature, empowered the police to break up socialist meetings, and put the trial and punishment of socialists under the jurisdiction of police courts. Although the socialists were initially weakened, they again began to increase their number in parliament. Although only two socialists sat in the Reichstag in 1871, their number and support grew with each election, until they had 35 seats in 1890. As early as 1876 Bismarck had sought legislation to outlaw the party but failed to get a majority. After two assassination attempts against William I he prorogued Parliament and ran a campaign in which the socialists were blamed for the failed efforts to kill the emperor. ...read more.

When William I died Frederic the oldest son of the Kaiser toke his father place in the throne, he was in power for only some months before he died and the youngest son of the Kaiser William II toke the place of his brother. William II did not have a close relation with Bismarck like the one that William I and Bismarck had before he was name Kaiser. This weak Bismarck power a lot because he could not control the new Kaiser as he did with William I. William II thought of the army as his own project instead of the army as William I did, this would create a lot of problems with England in the future. After some time of the Kaiser William II was in power new elections were held for the Reichstag because Bismarck did not have new propaganda to convince the German people to vote for a Reichstag that he could control, the results were extremely bad for Bismarck and most of the Reichstag was against him. Bismarck and William II fought on many subjects in relation with domestic and foreign affairs. This made Bismarck resign to his position as the prime minister of Germany. ...read more.