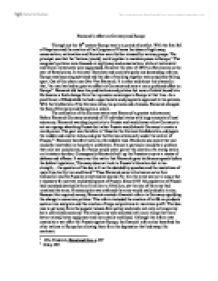 Bismarck's effect on Germany and Europe

Bismarck's effect on Germany and Europe Through out the 19th century Europe was in a period of conflict. With the final fall of Napoleon and the creation of the Congress of Vienna the ideas of legitimacy, conservatism, nationalism and liberalism were further stressed by various groups. The principal was that the "nations [would] work together to maintain peace in Europe." The congress's policies were focused on legitimacy and conservatism, while all nationalist and liberal movements were suppressed. However the year of 1848 is often known as the year of Revolutions. In this year liberalists and socialists spoke out demanding reforms. Europe was becoming scattered and the idea of working together was completely falling apart. Out of this chaos rose Otto Van Bismarck. It is often said about this chancellor that, "no man has had so great an effect on Germany and none a more profound effect on Europe". Bismarck did have his predilections and policies but none of which bound him. He became a fresh change from the repressive sovereigns in Europe at that time. As a practitioner of Realpolitik, he had a opportunistic and pragmatic approach to his policies. With the Unification of the German states, his policies and alliances, Bismarck changed the face of Germany and Europe as a whole. The unification of the German states was Bismarck's greatest achievement. Before Bismarck Germany consisted of 25 individual states with large amounts of local autonomy. Bismarck was deeply patriotic to Prussia and would never allow Germany to act as a sponge absorbing Prussia but rather Prussia would absorb Germany to create a world power. The goal was therefore to "dissolve the German Confederation, subjugate the middle and smaller states, and give the German states unity under the control of Prussia."1 Bismarck therefore took on a formidable task. Bismarck was aware that war would be inevitable on the path to unification. France in particular would be a problem that only war could solve, for France would never permit the creation of a strong nation on its eastern borders. ...read more.

It is important to look at the alliances created by Bismarck to explain his role in Germany and Europe because it illustrates his skill of negotiating and his intelligence that was required to maintain peace. To Bismarck alliances were merely convenient, and he did not hold true to them. His alliance system was successful for there were no major wars between 1871 and 1890, for the most part peace was maintained between the powers in Europe and Germany controlled the affairs of the continent. If his actions had been discovered at the time, there would have been conflicts between the nations of Europe with Germany at the centre. Germany would have been put in a position were no nation could trust her and no alliances would be made with her. Such actions would have isolated Germany from the rest of Europe and placed her in a dangerous position, vulnerable to war. Since the Commune of Paris in 1871, Bismarck had developed an uncompromising hatred for socialists and anarchists. At that time there were only two socialists in the Reichstag but their number of supporters increased with each election so that in 1890 they occupied 35 seats. Bismarck sought legislation to outlaw the party as soon as 1876, but had difficulty obtaining a majority. With two assassination attempts against Wilhelm I, Bismarck prorogued the Parliament and ran a campaign in which the socialists were blamed for the failed efforts to kill the emperor. As a result the conservative parties triumphed and the socialist party was banned but not eliminated. Bismarck's social legislation included winning over the working class with insurance, medical care and improved working conditions. Bismarck created the world's first well fare system to help impoverished Germans. Accident and old-age insurance were also introduced and implemented by the government. Despite all of his attempts of reforms and modern thinking, Bismarck had ultimately failed and the Social Democrats flourished. ...read more.

France was resentful towards them for the actions in the Franco-Prussian war and many other nations were weary of the strong power now present in Central Europe. Bismarck was forced to create alliances with nations such as Austria-Hungary and more importantly Russia, to insure the well-being of the nation. It is fortunate that Bismarck was such a strong and intelligent character, for another man would have crumbled under the pressure of making such necessary alliances. As a consequence of Bismarck's alliances, Germany remained a world power with large territory, large population, great industrial potential, a strong armed forces and a vibrant culture. Bismarck did a great deal to effect Germany and even all of Europe. Although eventually inevitable, he unified the German states, creating the largest German empire since the middle-ages, and one that would remain. Under Bismarck the face of Europe changed. To compete with Germany the other nations expanded their military, and began to think with democratic ideas. With the creation of the Reichstag and anti-Socialist acts, new ideas began to spread throughout Europe giving the continent a modern approach to politics. The balance of power also changed significantly with the arrival of a new major power. The alliances and treaties were desperate attempts to maintain the peace in Europe. The result however was endless tension that led to the Great War. In history one persons actions always affect the next great events. Bismarck is an excellent example of this. The unification of Germany created a downpour of emotions and conflicts in Europe that eventually led to war. Although powerful men like Napoleon had control before him and men like Hitler would gain authority after him, it is just to say about Bismarck that, "no man has had so great an effect on Germany and none a more profound effect on Europe." 1 Otto Friedrich, Blood and Iron, p.107 2 ibid p.108 3 Gordon Brook-Shepherd, The Austrians, p.112 4 R.R. Palmer. A History of the Modern World p.556 5 Haberman the Making of the Modern Age p .196 6 Otto Friedrich op.cit p.367 ...read more.