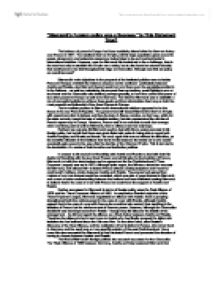 &quot;Bismarck's Foreign policy was a Success.&quot; Is This Statement True?

"Bismarck's Foreign policy was a Success." Is This Statement True? The balance of power in Europe had been suddenly altered after the German victory over France in 1871. The resultant German Empire, with its large population great economic power, strong army and extensive resources, looked clear to be an important factor in international relations. However, even for Bismarck this looked set to be a challenge, due to the need not only to establish the Empire as a nation, but to also found an external security that would prove to be vital throughout his reign as Chancellor. Although was this set policy an overall success? Bismarck's main objectives in the proposal of the instituted policies were to isolate France in Europe; maintain the balance of peace on the continent - particularly between Austria and Russia, who Bismarck feared would come to blows over the escalating problems in the Balkans - as well as maintaining his secured German territory; avoid fighting a war on two fronts and the Chancellor also desired, perhaps greedily, to have the control and power of two other powers in Europe as well as in Germany. The ideal for Bismarck was to establish a run of successful policies to achieve these goals and thus substantiate Germany as both the most powerful and influential of the Great Powers in Europe. ...read more.

Once more this was successful for Bismarck in that it isolated France and prevented the situation of having to choose between Austria and Russia. The final of Bismarck's foreign policies also secured successes for the Chancellor. The Triple Alliance of 1882 between Germany, Austria and Italy reassured Bismarck that unless a Franco-Russian alliance was formed then the prospect of war from either nation whilst standing alone could be easily contained. This alliance was, from Bismarck's viewpoint, aimed directly towards the segregation of France, as he was aware that she could not, and so would not attack Germany single-handedly. However, yet again the Dreikaiserbund was destroyed in 1885 due to further problems in the Balkans, and it became clear that disputes in this area were unlikely to ever be fully resolved. This time Bismarck needed to desperately to avoid the prospect of a war on two fronts. This concluded in the Reinsurance Treaty of 1887, which tried to localize the problem by assuring Russia that Bismarck would not support Austria in a clash over the Balkans territory. By documenting that in the case of a war between two of the powers that the remaining power would remain neutral, Bismarck succeeded in both preventing a war on two fronts and obtaining the neutrality he desired. ...read more.

The Reinsurance Treaty was very similar in that it was only short-term as France and Russia did eventually join in the 'Entente'. Bismarck further created himself problems, as the Second Mediterranean Agreement left him with no alliance to Russia, and so creating possible problems for the future. Finally by the end of Bismarck's office in 1890 France still viewed Germany with contempt and searched for revenge, while the situation in the Balkans continued to flare as did the tension between Austria and Russia. This leads me to believe that although Bismarck's foreign policy was successful in achieving his main objectives and solving problems in the short-term, all they did for the long-term was to simply delay the problems rather than resolving them. The Chancellor in fact made it difficult to maintain neutrality over the Balkans crisis in the long-term and it could even be said that too many alliances were made in an effort to obtain his goals, that it became too difficult to retain such a documented relationship with the other powers, and that perhaps Bismarck did not leave himself enough loose ends to play with the policies in the way he saw fit. Conclusively, it was probably an advantage for Bismarck that he left office in 1890, as it left Kaiser William II with the resulting problems to resolve and he was able to leave behind the tangle of long-term problems he had created. ...read more.