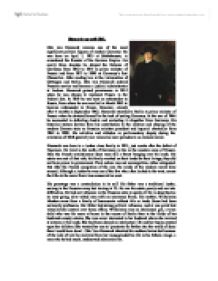 Bismarck up until 1861. Otto von Bismarck remains one of the most significant political figures of modern Germany. He was born on April 1, 1815 at Sch�nhausen, is considered the founder of the German Empire. For nearly three decades he shaped the fortunes of Germany, from 1862 to 1873 as prime minister of Prussia and from 1871 to 1890 as Germany's first Chancellor. After reading law at the Universities of G�ttingen and Berlin, Otto von Bismarck entered Prussian service and became a judicial administrator at Aachen. Bismarck gained prominence in 1851 when he was chosen to represent Prussia in the Federal diet. In 1859 he was sent as ambassador to Russia, from where he was recalled in March 1862 to become ambassador to France. However, already after 6 months in September 1862, Bismarck returned to Berlin as prime minister of Prussia when he devoted himself to the task of uniting Germany. In the war of 1866 he succeeded in defeating Austria and excluding it altogether from Germany. His historical stature derives from his contribution to the creation and shaping of the modern German state as Prussian minister president and imperial chancellor from 1862 to 1890. His activities and attitudes as parliamentary deputy during the revolution of 1848 generally are viewed as mere preludes to an eminent career. Bismarck was born to a Junker class family in 1815, just weeks after the defeat of Napoleon. ...read more.

He inherited this from his mother. He could be a charming and witty companion, a wonderful conversationalist. He had an ability to captivate and charm whoever he was speaking to, tsars to revolutionaries. However he had a violent temper especially when faced with opposition. He was determined and ruthless at getting his own way. His relations with William I were poor, their meetings often degenerated into "slanging matches". It is reported that he once ripped the handle off a door as he left the room. Two habits remained with him throughout his life. His charming and sometimes sensitive nature lead him to have an eye for women and had many affairs and relationships, even during his marriage. One included the daughter of an English Clergyman. He followed them around Europe, however she married someone else, and this lead to a huge bout of gambling, one of his major pastimes during his life. This bout was disastrous and lead to him loosing a large amount of money. Once married his wife was completely aware of his affairs and yet did little about it. She was content with looking after their children and knew that he would always come back. She was not that intelligent and deeply religious. When he fell in love with the wife of the Russian ambassador she wrote 'I have no place in my heart for jealousy'. ...read more.

He said that he was in favour of a united Germany, but not under that constitution. In 1850 he spoke to the Erfurt Parliament in defence of the king and his surrender to Austria at Olmutz. He said that the state should only fight in its self-interest and that that war had been useless. This speech gave him notoriety, and a promotion to Prussian Representative to the recreated diet. He stayed here until 1859. This was an important period of time for him. During it his opinions changed, he became increasingly anti Austrian and loyal to the Prussian monarchy. He decided that war between Prussia and Austria was inevitable. In 1856 Austria's prestige was reduced and she presented less of a threat in Bismarck's opinion. This lead to him beginning to say that the war was not only likely but also unavoidable, and began proposing negotiations with other European powers to ensure their alliance in any war with Austria. His ideas developed quickly now, and he began to say that Prussia should seek support among the nationalists and remove Austria from the confederation and set up an small Germany without them, under Prussian control. So at the beginning of the 1860s his opinions had developed sum what from his early extremist Junker opinions to a strong nationalist, however he remained a loyal supporter of the monarchy and absolutist government. Bismarck was a man of contradictory nature, in nearly every part of his life, right from an early age, and it was this, which shaped the man. ...read more.