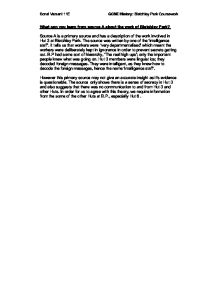 What can you learn from source A about the work of Bletchley Park? Source A is a primary source and has a description of the work involved in Hut 3 at Bletchley Park. The source was written by one of the 'intelligence staff'. It tells us that workers were 'very departmentalised' which meant the workers were deliberately kept in ignorance in order to prevent secrets getting out. B.P had some sort of hierarchy, 'The real high ups'; only the important people knew what was going on. Hut 3 members were linguistics; they decoded foreign messages. They were intelligent, as they knew how to decode the foreign messages, hence the name 'intelligence staff'. However this primary source may not give an accurate insight as it's evidence is questionable. The source only shows there is a sense of secrecy in Hut 3 and also suggests that there was no communication to and from Hut 3 and other Huts. In order for us to agree with this theory, we require information from the some of the other Huts at B.P., especially Hut 6. Does the evidence of source C support the evidence of sources A and B about the work of Bletchley Park? ...read more.

This primary source was sent to the chief of Staff Lord Ismay. The content of the source shows Churchill wanted messages with high priority reported to him immediately. It shows Churchill had strong communications too and from B.P. This source was highly likely to be produced during a battle when it was crucial to decode all messages quickly. There were a number of victories during WW2 with the help of B.P. One possible event referring to this source could be the Battle of the Atlantic in 1941 when B.P. helped defeat German U-boats which were attacking convoys in the Atlantic. The messages decoded by B.P. in the recent events during the war in many cases helped the further events that had occurred. Source G is a description of the work involved in Hut 6 written by one of the code breakers. The source greatly contrasts with source F. Source G shows how frustrating it was trying to decode the messages. The three wheels on the Enigma Machine sometimes made Hut 6 code breakers work all night due to the number of possible positions for just one letter. The source also suggests that the end result most of the time was not worth their effort because the code breakers never actually found out the results of their messages, 'and there it is, the Italian, the German, or whatever it is.' ...read more.

Source B however is a description of B.P. written by a woman at there in 1939. She described herself in the 'first wave' which means she was in the first set of people to work there. B.P. had just developed so obviously it had no impact at the start of the war, in 1939. Source E is a photograph of an enigma machine. It gives us no evidence that B.P. had an impact on WW2 however it does show us that the code breakers had to work very hard with the machines to decode the messages. It does not tell us if the enigma machine helped B.P. have a big impact on the war. In conclusion I agree B.P. had an impact on the success of WW2. Members of B.P. united together to help the British, Italians and French. But I do not agree Bletchley Park had a very great impact on the war because others were involved as well. It was the British army, navy and its allies, which mainly helped the defeat of the Second World War. B.P. did help the outcome of the war but only for a short period of time, which was in the middle of the war. However, evidently, it did provide support for many of the battles won during the war. Sonal Varsani 11E GCSE History: Bletchley Park Coursework ...read more.