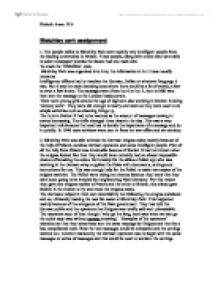 Bletchley park assignment 1. The people called to Bletchley Park were mainly very intelligent people from the leading universities in Britain. These people, along with others who were able to solve newspaper puzzles the fastest had one main aim: To crack the 'ENIGMA' code. Bletchley Park was organized into huts; the information in hut 3 was usually nonsense. Intelligence officers had to translate the German, Italian or whatever language it was. Hut 6 was the main decoding area where there could be a lot of words, a few or even a few letters. The messages went from hut 6 to hut 3, then to MI6 who then sent the message to the London headquarters. There were young girls around the age of eighteen also working in Station X doing 'donkey work'. They were old enough to marry and work so they were used to do simple activities such as cleaning things up. The huts in Station X had to be manned as the amount of messages coming in started increasing. The shifts changed three times in the day. ...read more.

This happened mainly because of the arrogance of the Nazi government. They had told the German public and the operators that Enigma was totally safe and unbreakable. The operators must of then thought 'why go the long, hard way when we can go the quick easy way without anyone knowing'. Examples of the operators' mistakes are that they sometimes sent the same message by Enigma and then by a less complicated code. Now the two messages could be compared and the settings worked out. Another mistake by the German operators was to begin with the same messages or series of messages and this could be used to workout the settings. Also messages that were less than 26 letters meant that the middle wheel never moved. This also made the codebreakers job much easier. Another reason why the codebreakers at Station X were able to break Enigma is that some very intelligent people were working at Bletchley Park, one of whom became one of the figures of the century. His name was Alan Turing, he developed the first computers which decoded messages much faster, these were made on Turing's ideas, the computer was known as colossus, and colossus ii was also built afterwards. ...read more.

Soon after in 1942 attacks on German and Italian convoys in the Mediterranean were becoming more successful thanks to Bletchley intelligence. This obviously meant they were very short on supplies and armory etc. Thanks to the shipping losses in the Mediterranean the German forces were ready to be finished off in North Africa for good. Bp told the British of a final attack which was to take place, knowing that they were ready to destroy the German forces the British let the Germans in and totally crushed them. The Germans then introduced shark, a new code which yet again gave the u boats the advantage in the second BOTA so yet again the people at BP proved themselves by breaking shark in Dec 42 and this time the battle went in favour of the allies for good. At the D Day landings BP recognized all but 2 of the German army divisions, and gave warnings of counter attacks and Hitler's commands. BP did however have some failures such as Crete and the sinking of HMS glorious but these were due to mistrust in BP. Sometimes, however BP was to blame for example when they picked up the message too late and by then it had become useless. Khobaib Anwar 10.6 ...read more.