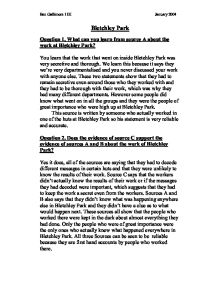 Bletchley Park Question 1. What can you learn from source A about the work at Bletchley Park? You learn that the work that went on inside Bletchley Park was very secretive and thorough. We learn this because it says they we're very departmentalised and you never discussed your work with anyone else. These two statements show that they had to remain secretive even around those who they worked with and they had to be thorough with their work, which was why they had many different departments. However some people did know what went on in all the groups and they were the people of great importance who were high up at Bletchley Park. This source is written by someone who actually worked in one of the huts at Bletchley Park so his statement is very reliable and accurate. Question 2. Does the evidence of source C support the evidence of sources A and B about the work of Bletchley Park? Yes it does, all of the sources are saying that they had to decode different messages in certain huts and that they were unlikely to know the results of their work. ...read more.

The person then goes on to describe hut 3 and explains about how any messages they received were cross referenced under their index system, which could show if the message contained any words they had decoded earlier. The information about the huts is useless in helping you to understand how Bletchley park was finally able to crack the enigma codes. Source D shows a photo of an Enigma machine but doesn't tell you any information about it and how when they finally did secure one they reversed it to translate coded messages. Question 4 Use sources E F and G and your own knowledge to explain the importance of Bletchley Park in the war effort. Bletchley Park was very important in the war effort because if they hadn't of cracked the enigma codes then the war would have lasted a lot longer and could have been lost. Source E shows the enigma machine, which is what Bletchley Park eventually managed to crack. Source F is a memo written by Winston Churchill, which says to give Bletchley Park anything that they want and that they are extreme priority. ...read more.

However the man who wrote it actually worked for Bletchley Park so his opinion would have been biased to make him look good. There is some truth in what he says because Bletchley did crack the enigma, which helped to win several key battles in the war. One of the battles was of the Atlantic where the Germans were sinking British supply ships and starving them into submission. However when the Enigma was cracked the positions of the U boats were learned and help the British to beat them. The man who wrote this source left out many key factors that helped to end the war. America joining forces with Britain after the attack on Pearl Harbour, which then meant the allies, consisted of Britain, France, Russia and America. With America came many new supplies, long-range bombers and because of their high economy it meant they could produce tanks, planes and ammunition fast and cheaply. He also didn't mention Churchill's great leadership and the fact that the Germans could never break Britain's resilient spirit. I believe that Bletchley Park did have a big impact on the war but there were many other factors that helped to end it. Ben Gallimore 11H January 2004 ...read more.