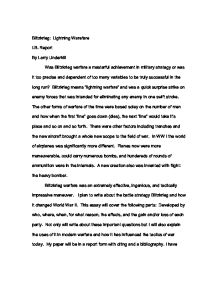 Blitzkrieg: Lightning Warefare I.B. Report By Larry Underhill Was Blitzkrieg warfare a masterful achievement in military strategy or was it too precise and dependent of too many variables to be truly successful in the long run? Blitzkrieg means "lightning warfare" and was a quick surprise strike on enemy forces that was intended for eliminating any enemy in one swift stroke. The other forms of warfare of the time were based soley on the number of men and how when the first "line" goes down (dies), the next "line" would take it's place and so on and so forth. There were other factors including trenches and the new aircraft brought a whole new scope to the field of war. In WW I the world of airplanes was significantly more different. Planes now were more maneuverable, could carry numerous bombs, and hundereds of rounds of ammunition were in the internals. A new creation also was invented with flight: the heavy bomber. Blitzkrieg warfare was an extremely effective, ingenious, and tactically impressive maneuver. I plan to write about the battle strategy Blitzkrieg and how it changed World War II. This essay will cover the following parts: Developed by who, where, when, for what reason, the effects, and the gain and/or loss of each party. Not only will write about these important questions but I will also explain the uses of it in modern warfare and how it has influenced the tactics of war today. ...read more.

The trick was to know where the Germans were going to strike, and to prepare in advance of it, to hit artillery with artillery, and meet air power with air power. But knowing where they would strike next was the real challenge, made difficult by a little device known as the Enigma machine. The Enigma machine was the most advanced coding device in the world. This device consisted of a geared machine with three numeric dials, and a keyboard. As each dial's number was changed, the gears shifted positions, and a whole new code was generated. Everyday, a new setting was used, and this device effectively kept the Allied forces in the dark about German movements and positions. The Allies needed to get their hands on the German Enigma Machine to counter the Blitzkrieg advances. Evaluation of Sources All the sources that I gathered seemed to say all the same things and some even listed others I had as sources. There was one site on the internet that had a suspicion about. It was a site at www.ww2tactics.dughy's.com/Blitzkrieg titled "The Strategy". The website was not professional at all. The reason it got me suspicious was the word Blitzkrieg was spelled wrong in every part of the report. There were also many grammatical errors within the text that made me suspicious of the validity of the words. I used this document the least I possibly could. As opposed to my best source titled, "Blitzkrieg, The Basic Strategy". ...read more.