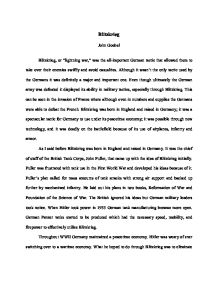 Blitzkrieg, or lightning war, was the all-important German tactic that allowed them to take over their enemies swiftly and avoid casualties. Discuss this tactic.

Blitzkrieg John Goebel Blitzkrieg, or "lightning war," was the all-important German tactic that allowed them to take over their enemies swiftly and avoid casualties. Although it wasn't the only tactic used by the Germans it was definitely a major and important one. Even though ultimately the German army was defeated it displayed its ability in military tactics, especially through Blitzkrieg. This can be seen in the invasion of France where although even in numbers and supplies the Germans were able to defeat the French. Blitzkrieg was born in England and raised in Germany; it was a spectacular tactic for Germany to use under its peacetime economy; it was possible through new technology, and it was deadly on the battlefield because of its use of airplanes, infantry and armor. As I said before Blitzkrieg was born in England and raised in Germany. It was the chief of staff of the British Tank Corps, John Fuller, that came up with the idea of Blitzkrieg initially. ...read more.

that the Panzer I, II and III were insufficient and only the Panzer IV would lead the German armies across Europe. Advancements in airplanes also contributed the success of Blitzkrieg. The Luftwaffe with its new dive-bomber the Stuka was another key aspect of the arsenal. The Stuka was carried powerful bombs and its accuracy made it absolutely deadly. Other advancements included better motorization and communications. With motorcycles and automobiles Germans could move infantry around the battlefield very quickly. This speed allowed infantry to better participate in Blitzkrieg. German support vehicles proved to be very reliable. Communications also improved. Radios also made great technological strives. Orders could be sent out on the battlefield quickly allowing for instant adjustments to compensate for discrepancies. Now that we have gone over where Blitzkrieg came from and what it takes we can go over how it is done. The idea was to hit fast and hard. ...read more.

The first ever use of this deadly tactic was seen against Poland in 1939 after Hitler invaded. The Polish army had and out of date military. Only horses challenged German tanks and it was easy for Panzers to eventually surround and neutralize Polish forces. Blitzkrieg was used further in Belgium, Luxembourg, the Netherlands, Yugoslavia, USSR and France. France was perhaps the first real test of the lightning war. It was in France that Germans were met with a force approximately equal to them. The French didn't slow blitzkrieg either. The power and speed of the German army catalyzed through Blitzkrieg rolled over the French Maginot Line and eventually to Paris. It was the Soviets who slowed Blitzkrieg. The German front extended over 1,800 miles made it impossible for a swift advance, which was needed for success in Blitzkrieg,. This tactic seemed otherwise invincible. Blitzkrieg was a powerful tactic. It proved hard to resist. German tactical masterminds perfected its technique and unleashed its ferocity across Europe. The irony of it is that it was one of Germany's best weapons against the Allies and it was born in England. ...read more.