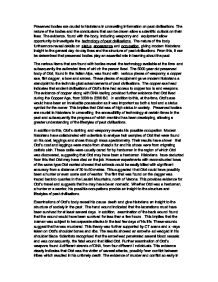 Bog Bodies. Preserved bodies are crucial to historians in unravelling information on past civilisations. The nature of the bodies and the conclusions that can be drawn allow a scientific outlook on their lives.

Preserved bodies are crucial to historians in unravelling information on past civilisations. The nature of the bodies and the conclusions that can be drawn allow a scientific outlook on their lives. The evidence, found with the body, including weaponry and equipment allow opportunity to investigate the technology of past civilisations. The nature of the body furthermore reveal details on status, appearance and occupation, giving modern historians insight to the general day-to-day lives and the structure of past civilisations. From this, it can be determined that preserved bodies play an essential role in learning about the past. The various items that are found with bodies reveal the technology available at the time and subsequently the estimated time of which the person lived. The 5000 year old preserved body of Otzi, found in the Italian Alps, was found with various pieces of weaponry; a copper axe, flint dagger, a bow and arrows. These pieces of equipment gave modern historians a standpoint to the technological advancements of past civilisations. The copper axe head indicates that ancient civilisations of Otzi's time had access to copper tools and weapons. ...read more.

Whether Otzi was a herdsman, a hunter or a warrior, his possible occupations provide an insight to the structure and lifestyles of past civilisations. Examinations of Otzi's body reveal his cause death and give historians an insight to the structure of society in the past. The hand wound indicated that the lacerations must have been survived for at least several days. In addition, examination of the back wound found that the wound would have been survived for less than a few hours. This implies that the Iceman was subject to two separate attacks in the last few days of his life. These wounds suggest that he was murdered. This theory was further supported by CT scans and x-rays taken on Otzi's shoulder bones and ribs. The results showed an arrowhead wedged in his shoulder blade. Scientists recognised that the arrowhead penetrated several blood vessels and was consequently, the fatal wound that killed Otzi. Further examination of Otzi's weapons found 4 different strands of DNA, from four different individuals. This evidence clearly indicates that Otzi was the victim of several attacks, possibly from conflict between tribes which resulted in his untimely death. ...read more.

Further wounds most likely created by the same weapon were found on the bridge of CLonycavan Man's nose to below his right eye. It is evident that a deep axe wound was also delivered to his chest and he was further disembowelled. It is clear that the 2300 year old persevered body died an extremely violent death, quite possibly some sort of sacrificial ritual. This is clear from the extremes that were taken to kill the man and the evidence in history of selective sacrifices; many sacrifices were honoured to be sacrificed and subjects of higher status were seen as more 'valuable' sacrifices. From this it can be concluded that the society that Clonycavan Man once lived in contained religious extremists or had generally extreme religions. This provides a greater insight to the structure and lifestyles of past civilisations. From this, it can be determined that preserved bodies are crucial to historians in unravelling information on past civilisations. A greater understanding of the past is important because of the conclusions that can be drawn from them. Both Otzi the Iceman and Clonycavan Man have significantly contributed to modern society's understanding of the past, allowing a deeper understanding of the human race itself. ...read more.